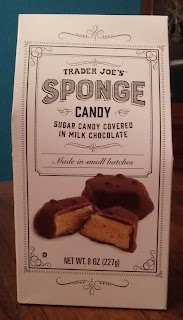 Candy. It's everywhere, at all times, but especially this time of year. Parties. Stuck inside cookies, which are also everywhere. As small, easy to give gifts. In little thematic ceramic dishes with elves and penguins on them, and if you're lucky, that elf is riding a penguin. Just earlier today, as an unexpected gift, I got a one pound box of chocolates thumped on my desk. "Merry Christmas" it said, courtesy of one of my company's field reps. Could be worse: she's wasn't the one who dropped the remnants of a 4.4 pound monstrosity off at the company table (umm, that'd be me). It's always within reach, it's the holidays, you're supposed to indulge...

...and I'm getting tired of it. Candied out. That's not to say I won't eat more, because I know I will, but man, the end needs to be in sight. Please tell me it is.

So, to be honest, I wasn't exactly anxious to try out Trader Joe's Sponge Candy. Yes, it's a thing, although I've never heard of it before. Don't judge me, I'm just sheltered. But the name kinda conjures up a kitchen sponge covered in chocolate....no thanks. Now a name like honeycomb toffee, I could go with that. 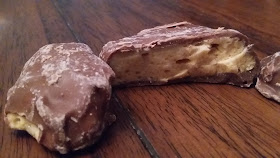 Regardless, does this TJ's candied sponge variant belong in your holiday candy plans?

Ehhhhh....maybe. I took a couple bites, and maybe I'm candyworn and jaded, but it's not that great. Not bad either. Inside the box there's a plastic baggie all filled with various sized chunks ranging from a mousey morsel to a two or three biter. Inside, they're all much the same: a thin coat of reasonably decent milk chocolate, and a light, airy, crispy yet rigid chunk of toffee-like substance. The sponge candy. It's an apt name, seeing as all the little air pockets and layers do visually resemble a sponge. The texture is kinda interesting - think maltball mixed with a wafer, except much lighter - but it's neither compelling nor offputting. The taste itself is, as I said, fairly toffee-esque except a little scaled back. It does make a neat little bite, but after one or two, I've had enough. 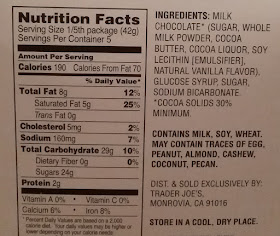 Both Sandy and I aren't swayed much one way or another. At least I can say I've eaten sponge candy and no, it has nothing to with Spongebob. A couple bites, and a shrug each. Cost only $3.49 for the package, so seems reasonable enough, in case you really actually needed any more candy. You probably don't. But there's a chance you'll like this stuff anyways.