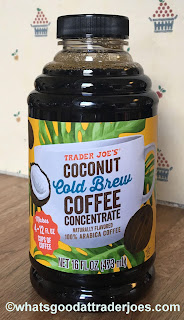 "This was obviously made by someone who hates coffee."

That's an actual recent quote from my mom, and in what actual context, I forget. Doesn't matter, I may be adopting it to describe any coffee that I don't like. I'm beginning to realize that I need to have my coffee just the way I like it, or I get cranky. This must be one of those signs that I'm getting older, I guess. File it alongside: Realizing I can play Pearl Jam too loud while in the car by myself. Recognizing the need for supportive walking shoes. Not recognizing anything on the radio except the classic rock station.

Anyways, here's yet another cold brew concoction from our main man here. This time, it's Trader Joe's Coconut Cold Brew Coffee Concentrate. Well, okay. Flavored coffees aren't really my deal, per se - coffee should taste like coffee, ya whippersnapper - but heck I'd give it a try.

I like the idea of cold brew concentrates, mostly because I don't like the idea of paying three or four bucks from a coffee shop every time I want one. But the trouble always seems to be getting the ratio of concentrate to diluent correct - too much of one or the other throws it way off. Seems to be the same case here. I measured, I tried, I recalled my seventh grade chemistry teacher saying to measure the meniscus...still couldn't get it quite right. So there's a part of the problem I'm willing to own.

But the other issue? It's just not very good coffee.

It's the coconut. In theory, it sounds good, but to me, it doesn't jive. The coconut just kinda clanks around, with almost a tinny or metallic taste to it. Ugh. No likey. It's obtrusive. And it's tough to tell for sure, but the coffee almost seems to rely heavily on coconut for flavor, instead of the natural earthy goodness that actual good coffee delivers. If you need to add flavors to make your coffee drinkable, to me, it's just not that good to begin with.

I realize I may be in the minority here. That's okay, fire at will. Sandy absolutely disagrees with me, noting that she liked making hers with sweetened almond milk and ice. I think I took a sip of one of those, and admittedly it was almost passable. A terrible idea, though, is mixing this with something like a  flavored LaCroix...we tried it, it's supposed to be trendy....it also tastes awful.  Sandy would buy again happily, while I'd just as happily mumble about it if it were to reappear. Maybe it's made not by someone who hates coffee, just by someone with a very different opinion than me. Bah. My blog, my score. Get off my lawn.