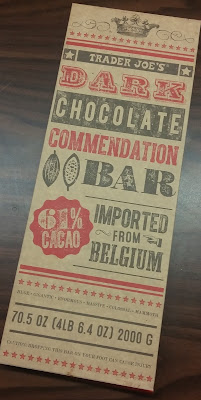 Years ago, in enough time passed that I can't recall what traces of logic I employed in deciding to do so, I invested about $5 at Bed, Bath, and Beyond on a universal TV remote. Not bad in the right circumstances, right? Well...this wasn't just any TV remote. The thing was freakin ginormous. Absurdly large. I don't recall the exact dimensions, but it was at least six inces wide, over a foot long (probably longer, and at least an inch thick. Each button was big enough that I could danced on top of them. Tom Hanks playing "Chopsticks" in the movie Big style, every time I wanted to change the channel. It took up half our coffee table. I guess I thought it was funny or cool or ironic or just dumb enough...I mean, it worked, but the novelty factor quickly wore off, and I ended up pitching it. I'm pretty sure Sandy shook her hood the entire time we had it, wondering what the h-e-double bendistraw I was thinking.

I forgot all about that until we bought Trader Joe's Dark Chocolate Commendation Bar.

Don't rush to get too judgy. I suppose it's possible that Sandy and I could eat two kilograms of chocolate all by ourselves. Then again, it's also possible that I am the king of France. Possible? Yes. Probable? No freakin' way. But we hostd our annual holiday Cookie Potluck over this past weekend, and I figured, let's drop the $14.99 on it, we'll have enough guests, it'll be a cool thing to have on our table. In a pinch, we could use it as our table.

My pics don't do it justice. It's...just really ridiculously big. Should have really busted out the measuring tape, or found a VW Bug to use as a size reference. Couple feet long, About a foot wide. Over an inch thick. That pic over there? That's just half. It's way too unwieldy to even bust off a piece with your hands. I'm not sure I wanted to risk busting a kitchen knife. What you really need is a rock chisel, or a large sanitized flathead screwdriver and a mallet. With a complete lack of better options, I ended using the prong from our knife block to randomly stab and chip off some pieces. 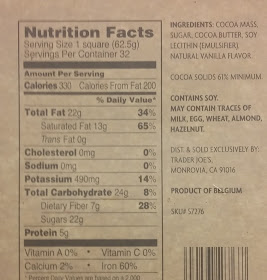 Unless you're making an actual house out of gingerbread and you need shingles, there's no practical use for a bar this big. I totally get the appeal - larger than life chocolate bar, anti-Zoolander by its very existence - but once the novelty wears off, it's just chocolate. A lot of chocolate. Dos kilos. Whispering that in a Spanish accent makes it sound even more intimidating.

Apart from the size issues, it's pretty decent chocolate, though. Earthy, bittersweet, but with a hint of creaminess - those Belgians got chocolate down to a science. It's not earth-shattering by any stretch, but good and solid, and I guess if I had to eat 4.4 pounds of something, there'd be far worse options out there.

Dat size tho....it's too big. Over the course of several hours, me and a few dozen of our party guests chiseled away not even a quarter of the bar. If it weren't as thick, it'd go down easier. Personally, for a still really huge bar, I'd make it the same length and width but make it half as thick, and charge something like $8 or $9 for it. That's still an outstanding value, and makes it more likely the whole bar would be consumed. Both Sandy and I like it, but considered returning it just because there's too much left. I ended up taking it into work where we'll use it as emergency rations in case we all get snowed in.

Maybe there are some practical options for something this large. Maybe there's some really fun ones. Those are up to you letting us know in the comments below. Darn good chocolate, too darn big. Caveat emptor. I have no idea how to accurately and fairly grade this, but something around a "not bad" sounds right, all things considered.