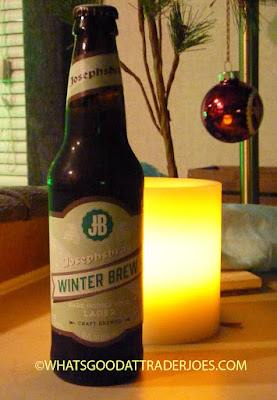 Another Princeton run? Nope. Sonia and I are in the South. And it's way easier to buy beer down here. Back in the Keystone State, you had to go to a specialized beer distributor to get your hands on cervezas. Our part of the Garden State wasn't much easier. No grocery stores carried the stuff—not even the happy Hawaiian-shirt-clad helpers at TJ's could sell you suds in South Jersey. Even Wilmington, DE was similarly prohibitionist.

But my old stomping ground of Wilmington, NC had an especially alluring wooden shelf well-stocked with Trader Joe's brand bottles, including a "mix-a-six" option, where customers could try up to six different craft beers in one cardboard case, paying à la carte prices for each bottle—most of which were in the ballpark of one dollar each. Merry Christmas to me.

I guess Trader Joe's worked out a great deal with Gordon Biersch—they're mass producing all of the Josephsbrau label beers for TJ's stores. When I used to visit the Gordon Biersch restaurant chain during my time in L.A., I'd refer to it as "Gordon Beer-ish." As in, "That Gordon. He's such a beer-ish fellow, isn't he?"

Quite beer-ish indeed, it turns out.

This brew was the first one out of the fridge. 7.5% alcohol content, seasonally-appropriate, and a sleek, handsome label? Seemed like the logical choice. 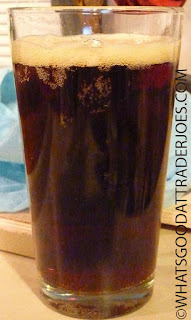 Now keep in mind, I've only broadened my horizons to dark beers in the past few years. But in that short amount of time, I've discovered what I like and what I don't like, and this beer was somewhere in the middle.

It's got a nice deep brown color, and it pours with a small amount of suds on top. There's a molasses-esque sweetness about it, but it's still dark, malty, and very subtly spicy. It's not super thick or heavy the way some dark beers can be—I'm not a fan of drinking motor oil.

I still don't have my cicerone certification yet, but I'm working on it. When tasting new beers, I always make up my own mind about how I feel about them first, but I like to check BeerAdvocate after the fact to see just how far off I am from, you know...people who actually know what they're talking about. Seems these pseudo-beer-experts liked this brew a bit more than I did in general, but user "HopsAreDaMan" in particular summed up my feelings about this beer when he said, "...although I would happily drink this beer if offered to me, I would not seek it out."