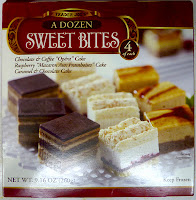 Because I'm a lazy fool, for one third of this review, I'm simply going to refer you to this link. It's our review of the Raspberry "Macaron aux Framboises" Cake, one of the constituent parts of this Sweet Bites product. I like how TJ's uses the words "raspberry" and "cake" in the title of the product on this Sweet Bites box. Framboises means raspberries, and I'm pretty sure Macaron is a type of cake, so for those of you who are bilingual, speaking both French and English, you're probably reading that product name as "Raspberry Cake of Raspberries Cake" or some other such redundant nonsense.

I'm sure there aren't that many bilingual French/English speakers reading this. I just wanted to write "Raspberry Cake of Raspberries Cake" because it makes me giggle. For those of you who are as lazy as I am, I know you aren't going to click that other link, so I'll just go ahead and let you know that we gave that cake by itself a bottom line of 9 out of 10. Not too shabby.

Next: the tiramisu. Er, no wait. They call it "Chocolate and Coffee Opéra Cake." But it might as well be tiramisu. I'm not a huge fan of tiramisu. It's overrated. So's this stuff. Pffh, "Opéra Cake," how arrogant. Maybe my tastebuds just aren't refined enough to appreciate it fully. Don't get me wrong, it's not awful. But when it's up against two big winners, its flavor is a bit too subtle—a bit too understated. And I'm not terribly into coffee-flavored desserts, anyway. Sonia gives the "tiramisu" 2.5 for being too soft. I'm not sure what she means by that, but I give it a 3 for being...not as good as the other two. Bottom line: 5.5 out of 10.

Finally, we come to the Caramel and Chocolate Cake. Sonia says she didn't taste the caramel, and that apparently made her angry. I guess she feels that TJ's jilted her out of some tasty caramel. I agree. I didn't taste the caramel, but I don't really care because the cake was freaking awesome. It was soft and sweet and full of some kind of yummy, creamy something. It wasn't quite a tres leches cake, but it was reminiscent of that level of deliciousness. Certainly, it was drier than a tres leches. By the way, tres leches is my favorite kind of cake. If you've never had a real tres leches cake, drive to the nearest Mexican bakery and buy one...even if it's in another state. Go! Seriously, it's worth it. You won't regret it. Sonia actually made a really good one this past week for Three Kings' Day. Sonia's cake actually overshadows all three of these Sweet Bites (I am writing that right now for the brownie points I'll get with my wife, but it really is true). So all of our scores may be a little low. But anyway, Sonia gives this one a 3.5. She says it would have been higher if she could taste the caramel. I give it a 4.5. I liked it just as much as the Raspberry Cake of Raspberries Cake. Bottom line: 8 out of 10.

And for our final score, I just average out all three of the sub-scores. 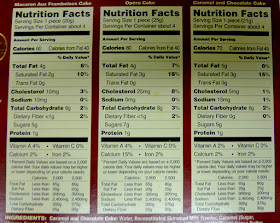