Trader Joe's Everything but the Bagel Seasoned Bite Sized Crackers 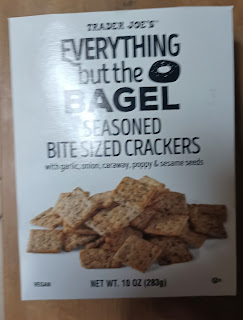 Sometimes just a little rebranding is needed to get a little spark or buzz. Just ask Dunkin'. Dunkin' who? That's not a question that needs to be asked, but now I'm able to tell my kids that when I was their age, it was called Dunkin' Donuts. Now, just Dunkin'. You barely noticed that change, but I'm betting those DD suits are betting you'll now notice everything else that their "bake places" have, including crappy oversugared coffee drinks and greasy sammies. Oh well. Their profits are looking good as a result.

More relevantly, here's Trader Joe's Everything but the Bagel Seasoned Bite Sized Crackers. Ahh, good ol' EBTB. It's a growing behemoth of a TJ's-nurtured "pet brand" so to speak - it's everywhere now - the seasoning blend, on chips, interestingly on bagels (everything but the bagel bagels? what?) and even on salmon. And now, finally, crackers.

Oh wait. I stand corrected. According to my TJ's inside sources (AKA whoever happened to be the cashier on my last trip), these crackers have been around for YEARS and were just rebranded under the EBTB banner. This actually sounded vaguely right - I kinda remember a red box - but never tried them, never picked them up. Didn't help that there's only so many crackers one household should buy on any given trip, and all our usuals were out of stock, which highlighted this gleaming white box of snacktime promise even more prominently.

Anyways, as far as crackers go, it's a decent cracker. Think of a slightly knock-off Wheat Thin with all the usual garlic and onion and various seeds which somehow is universally accepted as "everything" when quite frankly it excludes a lot more than it includes, and there you have it. There's plenty of flavor by themselves - I'd almost say too much - which we've been snacking on and off on. It is a bit too potent for a cracker, so a little pairing with some cheese is a good move. There's ample munch and crunch, for sure. In our household, at least, the purported adults like them more than the kiddos do - they can down a pallet of Cheddar Rockets in a day, this box has survived for nearly a week now. It's a good snack, for sure, but not addictive. At most, it's a fairly possible rebuy.

My apologies for the crappy pic. It's what happens when you have to snap one before dawn as you rush out the door. Maybe instead of rebranding myself, i just need a better set up And time. Lots more time. Sigh.

Anyways, give 'em a try if you feel so inclined, and if like us you previously ignored their existence just to be enticed by the new packaging.

Bottom line: Trader Joe's Everything but the Bagel Seasoned Bite Sized Crackers: 6 out of 10 Golden Spoons