My lovely bride and I say often we go on vacation to eat, and while mostly somewhat true, we have to attack our food game plan strategically. I mean, we only have so many dollars, and God knows enough kids, and trying to keep everyone more or less happy away from the familiarities of home is challenging at times...or often when it's 100 degrees in Washington DC like it was last week when we went...but anyways.

So, yes, we enjoy going out and checking different restaurants and bakeries and whatnots, but usually stop at a TJ's for some staples and easy treats, so while something like Trader Joe's Iced Raspberry and Cream Cheese Danish Strip would never make into our cart at home, it will when it means an easy, relaxing morning at the AirBnB. It had a pool...and chickens too! Sounds better than wandering and sweating aimlessly around the National Mall. 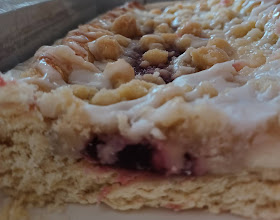 I mean, what can be said here. I think the pic really says it - you can basically taste it by looking it. There's nothing special or unique or amazing or anything here. It's a large, easily shareable Danish in strip form. So it's good...but great?

Nah. The whole shebang is a bit thicker than I thought it'd be, so that's a good start - nobody likes a flimsy Danish. The crust itself is thick and layered and buttery and appropriately bready and flaky where needed, but all that needs more filling to balance out. here's where it falls short - not quite enough raspberry or cream cheese. Maybe 50% more of each would be perfect, so it's not like a smidge off. And it's a shame, because both those components are quite tasty - the jam is nice, sugary and tart, while the cream cheese is cool and creamy, and work well together as one would expect. All that icing atop is a good touch - maybe a touch less would be fine, but it's not worth making a fuss over as is. 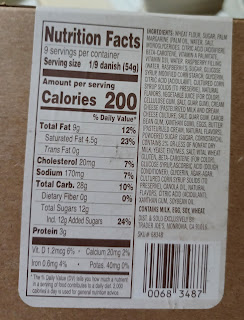 But anyways, for it being a grocery store breakfast treat more than large enough for the family, for like $5, instead of $8 slices of pie (delicious!), $5 popsicles (also tasty) or $6 cookies (also good) - all of which we also purchased while on our trip - we will take it and may buy again next time we're on the road. Double threes.

p.s. - Unrelated to this post, I finally saw and bought a bottle of Trader Joe's Cookie Butter Beer while away....never drank it....and accidentally left it in the fridge at the AirBnB. TJ's doesn't sell alcohol in my home state of PA. If anyone can somehow help me get a bottle please let me know - I really want to try one!