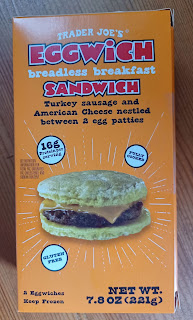 Age old question time: which came first, the chicken or the egg?

In the case of Trader Joe's Eggwich Breadless Breakfast Sandwich, the answer is pretty clear to me: the chicken.

Years ago, remember when KFC made waves with their sandwich using two slabs of fried chicken as the bun? If memory serves correctly, Taco Bell followed soon after with a fried chicken taco shell. While perhaps not the first ever entities to do so, I feel as though that's when the idea of using protein in place of carbs for sandwiches got introduced to the general public consciousness. That's straight spitballing with no research behind it whatsoever,so if I'm wrong I'm wrong, but I'm sticking to it...for now.

Anyhoos, the TJ's eggwich. Love me a good breakfast sandwich, and while tough to screw up, they unfortunately can be. Just ask the new cafe by my workplace. Ugh. 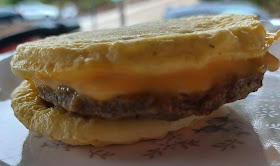 What struck me yet again about this kind of sandwich is how normal it all tasted. Like, the lack of carbs was scarcely noted. Certainly, a good bagel or croissant or whatever can add to the overall appeal of a sandwich, but when not there and everything else is good enough as is, their lack of presence really isn't a huge deal.

That'd be the case here. First off, the eggs. Certainly, they're not as good as fresh-cracked ones, but for a frozen egg entity it'll do just fine. The egg pucks are a bit firm, to be sure, but not rubbery or chewy or anything, and not too un-egg-like to elicit much response.

The turkey sausage and cheese are pretty standard issue, without much to note. If you want to add a little salsa or hot sauce to liven it up, by all means, go for it. As is, there's a nice little white pepper/black pepper to give the whole sandwich a little savory flair. It's all not all that greasy at all.

I like 'em, as does my lovely bride. Apparently Costco sells a version of something similar to this which we neglected to price-check, so I'm not 100% sure of how great a deal that two of them for $3.99 is, but I know that's about what one breakfast sandwich costs most anywhere these days unless you're going off a drive thru value menu. So there's that. These sandwiches are very likely rebuy to help tide over on the busy mornings as school winds its way back up and I'm back in the office for my daytime job. Decent sandwiches for sure, so don't be too chicken to try 'em out!