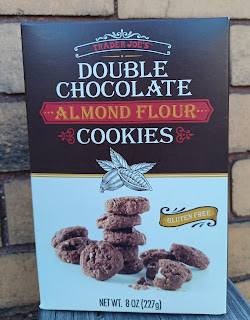 Oh, double chocolate. Can any other words in the English language elicit such instant intrerest and happiness? Double rainbow guy was pretty happy, of course...but double chocolate? C'mon now. It made you look. Admit it.

Such as it is with Trader Joe's Double Chocolate Almond Flour Cookies. There's instantaneous intrigue, and if you deny that, I'm calling your bluff. Double. Chocolate. Bring, It. On. 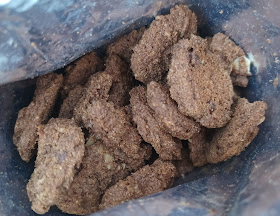 First off, let's admit: These are some decidedly small cookies. I mean, tiny. If a serving size is seven cookies and there's eight servings in this rather smallish box, we're talking more like Zoolanderesque cookies for ants, right? That's the case here. Each "cookie" is not that much bigger than a marbe, and I can't expect them to be more than one bite for practically anyone, small children included.

That being said, these bi-chocolate bites pack a relatively decent punch. As the name suggests, there's chocolate in the actual cookie dough, as well as mini chocolate chips sprinkled through out. Plenty of chocolate for anyone! It works, especially as the cookie itself is soft yet crunchy, crumbly yet with a bite, melt in your mouth yet worthy of several chomps. With it being almond flour, there's a small touch of earthiness and nuttiness that lends itself well to the cookie as a whole. I've had other almond flour confections before, and I'll be honest in saying this is one I've enjoyed more than others.

I'd eat way too many of these, but fortunately the almond flour also makes them a little heavier in the tummy. As one not terribly senstive to gluten one way or another, I'll take that built-in portion control as a plus. Good cookies, and not too cardboardy or weird like some glutenfree products can be, and for like $3ish for the box, it's a good value. Eat 'em up, there's almost no reason not to. Double chocolate. What a world. Double fours.