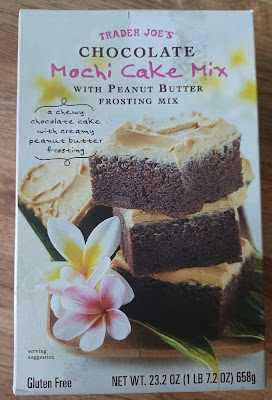 Ask my lovely bride a simple yes or no question, and chances are you won't get a simple answer.

For the sake of our marriage, going on nearly twelve years now, I won't get into too many specific examples of this. But it kinda drives me crazy, even though I should be used to by it now. I mean, we've been together for long enough, and I've never gotten a yes/no answer...but anyways...

Most recent/relevant example: when i was trying to bake the Trader Joe's Chocolate Mochi Cake Mix with Peanut Butter Frosting Mix for a dessert the other night. the instructions called to bake it in an 8x8 baking pan. I couldn't find it. I asked her if she's seen one around or if we had one. "Well that's the one you exploded that one time because of whatever you did in the oven and remember all that broken glass..."

Thanks for the fond memories. Did we have another one, maybe a spare or we rebought one? Can't remember everything. But apparently the answer was no. I baked it in a 9x7x2 instead. Can you guess what you're getting for Christmas, my love?

Anyways, on to brownies.

Wait, I mean chocolate mochi cake. Which really is a lot like brownies when it comes down to it.

I mean, sure. It's rice flour, gluten free, a little chewy and bouncy. Emphasis on a little. That's all fine and well, but when translated via a chocolate flavor, my 'merican mouth can't shake the sense that it's essentially a brownie. Can a brownie by any other name taste as good? The answer to this yes/no question: Yes, of course. It's a nice chocolatey flavor for the cake, decidedly more towards sweeter milk chocolate than dark, but that's fine. It's chocolate.

I may have muffed the frosting mix atop. It's kinda the reason I'm not showing you a pic of my creation. The instructions said to get an electric mixer and cream a stick of butter with the PB powder in the box. That sounded like too much work and dishes, so I instead slightly softened a stick via microwave and mixed the powder in by hand before putting in the fridge to reset. The cake was also kinda warm when I put it on, so yeah...not a visually appealing creation, but that's on me, not TJ's. Tasted fine, and while not really PB by any stretch, it wasn't some overly sweet annoying imitation concoction either, and it worked well with the cake because it's chocolate and peanut butter.

We all liked it, and if you asked us if we'd buy again, I'd say sure, the kids would give an emphatic "Yes!" and Sandy would eventually give an answer that translated to a yes...I think.