Last week, a daring young gentleman tweeted about turning this sour ale into a float. He asked the simple question: "Good idea or bad idea?"

But what if an outside element were to sweeten this sour beer...something like, say, vanilla ice cream?

It works. Against all odds and all my instincts, it somehow works. This isn't the first time beer has surprised me with its versatility. It's amazing that Guinness mixed with Bailey's functions so well as an Irish Car Bomb. I'm still in awe that beer can turkey is a thing, although I do have a terrible time removing the shards of aluminum from the stuffing mix. Just kidding.

On its own, this product is exactly like its cranberry counterpart, but, you know, with strawberry flavor instead of cranberry. It's still quite sour, although not quite as harshly tart as the cranberry version. It's surprisingly not sweet, and maintains its identity as an ale—not a wine cooler or girly-sweet fruit beer. No offense to you ladies. 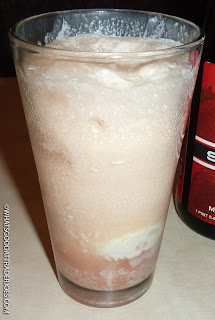 Speaking of ladies, Sonia has become an aficionado of sour beers as of late. She's into the gose-style brews that have been somewhat trendy in this country in the past couple years or so. So how does this sour cerveza compare? It's good, she thinks. She likes the overall flavor and sourness level, but she's had a few brands of gose that she prefers and thinks are much sourer. This particular beer isn't really a gose. It's a witbier, produced by Petrus, just like its cranberry predecessor. Overall, I think this flavor is a tad more drinkable and probably works better for floats and other off-the-wall ale experiments.

Three and a half stars from Sonia. Four from me. If you do pick up a bottle, be sure to grab some vanilla ice cream, too.