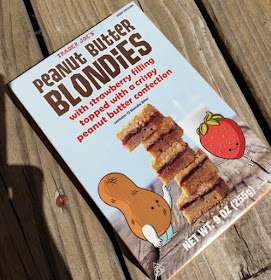 It's a quick, easy, portable, cheap meal that can be reasonably nutritious. I'll slap one together real quick when running out the door early to work. Chances are, on whatever day you're reading this, that I had one this morning. I have kids who love pb&j, so there's always making them for their school lunches (admittedly we'll usually use sunflower seed butter then). If we're going somewhere (baseball game, amusement park, state park, beach, road trip, etc) chances are we'll make then instead of taking out a second mortgage for concession stand fare or subjecting ourselves to McD's. They're not the worst in a pinch...but still. Rarely a week, or heck even a day, goes by without me making some sort of pb&j type concoction. It's a staple.

That being said...do I really want/need one as a dessert?

Back to these psuedo-sammiches. That's what I call them...because that's what these blondies taste like. There's plenty of peanut butter layered on, just the way I like, with a thin layer of strawberry jelly. Kinda surprised it's strawberry, as the first impression was that it's pretty tart. I almost suspected mild raspberry and not strawberry. Still, it works. 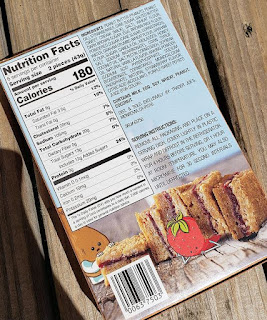 Those two elements override the taste and feel of anything else. I suppose the blondie brownie in there could be a fine tasting base...but with all that rich peanut butter and jelly on top, I can't really taste it and my brain defaults to it being cold, dense bread, like bread that got a little too chilled and smushed when wedged in a cooler. That's not a bad taste....but I wanted to taste the blondie, too. I can't.

That "peanut butter confection" on top admittedly adds a real nice touch. It's like some sort of crispy dust and is about the only taste/texture cue that this is not a regular peanut butter jelly sandwich. I like it and hope it can be sold seperately somehow...I'm salivating at thinking of it as an ice cream topping.

Anyways, these aren't terrible treats. Sandy and I like the peanut butter blondies just fine. They are one of those "thaw out" type dessert deals that are sold frozen, and a serving size is two of the little square bites. They're rich enough that just one will really do. Strangely, our kids aren't too fond for whatever reason. Weirdos. Still, I wish they were somehow more "treat-like" and less "sandwich-like" if that makes sense. Eh well. They're definitely not bad as is.