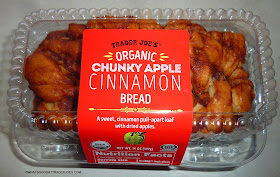 So much symbolism with the apple. "Eve ate the apple," even though it wasn't really an apple. "As American as apple pie." Newton's apple helped discover gravity. The Mac computer symbol is an apple with a bite out of it. "The apple doesn't fall far from the tree," as they say.

So what do I have to say about this appley product? Applicious? No, unfortunately.

App-palling? Nah, I wouldn't quite go that far.

We both found this stuff disappointing. Our loaf was very dry on this inside, and Sonia and I both came up with the adjective "oily" to describe the outer portions. Not moist. Oily. 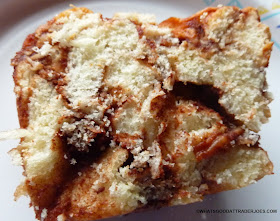 There's a decided lack of apple pieces. Apple chunks? No way. Not one. Not even a ton of apple flavor. Cinnamon, yes. If anything, there's way too much cinnamon. That's the primary flavor. And we both like cinnamon. There's just something about our loaf that makes us want to cough. It's not that we can feel the cinnamon granules. It's just an odd, dry, cinnamon vibe that's devoid of the juiciness of apples or the softness of a traditional loaf of cinnamon bread. 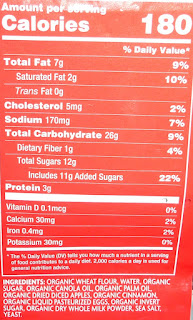 The norm is that we find a product at Walmart that can compare to something at TJ's, and the latter almost always outshines the former. Price, quality, organicness. You name it—the Joe's version is better in almost every way. It's generally laughable to even compare the two. However, in this instance, Sonia recently discovered some apple cinnamon bread there that blows this loaf out of the water. Unfortunate for this product. No, the Wally World bread isn't organic, nor is it "good for you" in any way. But it tastes the way we wanted this stuff to taste.
Just FYI, the top part of the nutrition information got lost in the glare. It states that there are seven servings per container, each one two ounces.

Two and a half stars from this guy. Only two from the missus.