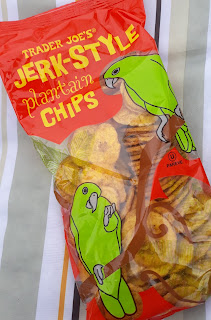 Of course it can't be found now, but earlier this week I somehow stumbled across a blog detailing a couple's weight loss journey after adopting a plant-based diet. Not to be disrespectful, because that's AWESOME and they were apparently very succcesful with it, but that's not the part that caught my interest. Nope. Instead, it was how they got started that did. Namely, and this really can't be fully recommended across the board, but...they ate nothing but plain potatoes for two weeks to kick things off.

From what I surmise, it was like to reset their tastebuds, a little sensory deprivation so they'd more easily adapt to finding enjoyable flavor in their new diet...but still. Props to them, and it's only weird if it doesn't work.

One small step up from that would be plantains, I'd think. Similar plainness and starchiness. A little sweeter, sure, but not as much sugar as even like a banana. Plantains are plenty tasty, but they could at least occasionally use a little livening up, too.

If you're not familiar with plantain chips, they're still a little crispy and crunchy, but there's also kinda soft-ish Styrofoamy kinda feel to them, too. They're sorta an odd mix between potato chip, banana chip, and disposable coffee cup. I personally love that kinda texture, but it can be offputting to some.

That's what we got going on here, but the chips are coated all over with jerk seasoning. And it's potent. Hooo-hoo. My four year old took one lick of one chip and immediately reenacted Buddy the Elf and passion fruit spray. Not for her, for sure...but man, it's for me. Plenty of heat, plenty of spice. But there's also a certain "warmness" that plays into the natural flavors of plantains. I think that derives from the allspice and cinnamon. So it may not be a true "jerk" seasoning blend (hence the "jerk-style", I suppose), but there's still the garlic and pepper and chili and everything else, so it works and therefore is not weird.

Delicious chips. A bag sets you back only $1.79, and I kinda can't believe that it's not a single serving, because I could devour the whole thing. Could. Shouldn't. I won't say that I won't ever. Excellent chips in my opinion. Are they healthier than potato chips? Who knows? But I like them as a variation at the very least. Check 'em out for sure! Double fours.