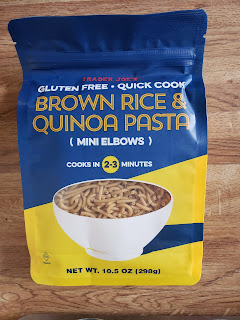 This has probably been shared before, but seared into my memory from growing up is one of the worst things ever done to my mom's perfectly delicious homemade macaroni and cheese: canned tuna fish. Maybe you like that stuff, and that's fine, but for me it makes me gag as I can think of is my old cat barfing it back up after begging for some. All of us kids hated it, too, so if we were all acting up my mom would make tuna fish casserole as a "punishment meal." Such was the case one day, but somehow I was pretty innocent in the whole matter, so when my mom said she was making tuna fish casserole for everyone, I probably broke down in tears and asked if she'd take mercy and at least make it more like her mac 'n cheese, but just add the tuna. She took mercy and my suggestion...and it wasn't bad compared to punishment casserole but against her heavenly mac? Mortal sin. Awful.

And then for like the next time ten times she mac 'n cheese, she put in tuna fish, crimes committed to earn that or not. I still haven't completely forgiven her.

Point is, there's far worse things you can do for homemade mac 'n cheese than to use Trader Joe's Brown Rice & Quinoa Pasta.

But seriously: not intended for mac use. Would be better thrown out the windows for that.

It's not that this gluten free quinoa/rice min elbow pasta tube experiment tastes bad. No, not at all. Perfectly fine and I'd say at least when swimming in cheese and a little garlic salt, it tastes the same as the regular semolina fare. 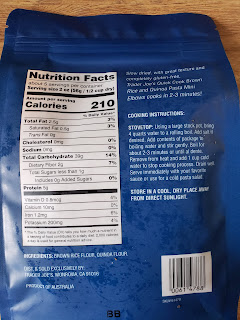 It's just mushy. So, so mushy. In its defense, we might have slightly overcooked the noodles, and by that I mean more towards the three minutes and not two the package gives for its boil time. Seriously, even picking a noodle up (like pinching one out of the pot) caused the whole thing to practically disintegrate. I'm thinking the reason why they're mini is that anything bigger would stand no fighting chance of being structurally sound.

Still, in about thirty seconds, the pasta went from appropriately firm, slightly denser than al dente noodle to little micro mush tubes. There's not much forgiveness there.

I'm guessing that mac n cheese was the wrong choice to try out the pasta. With regular sauce, or perhaps a cold pasta salad, or in some other less demanding dish these noodles might have been just fine. Or if mushy mac is tolerable for you and you need a gluten free option, by all means, go right for it.

In all, I really have no quarrel with this product. Quick cook convenient gluten free options are always welcome. Just keep a close eye on it and consider its application carefully. If we had done so, maybe I'd tune a different song. Couple bucks for the package, and three spoons each.