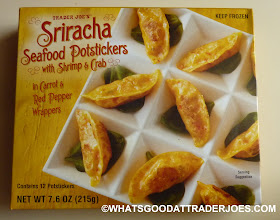 Trader Joe's 50th anniversary? A rare total eclipse of the sun over the USA? How spectacular on both counts!

Unfortunately, I picked a relatively lame product to review right after the monumental events of the last few days. How anticlimactic.

Sriracha? Seafood? Asian dumplingy things? Doesn't sound too shabby to me. What's not to like? Hmm. Well...

First of all, I thought this was a new product. It's not. It's been around for a while, though it looks like it may have recently been an unwitting participant in one of TJ's infamous repackaging schemes. Apparently, it used to be green and red? I don't know if I have those facts straight, but I have a sinking feeling that someone will correct me in the comments section if they've got better intel than I do.

Anyhoo, I think I heard one of you ask, "What's not to like about this delicious, exotic appetizer, Nathan?" Well, first off, the texture...but before I go on a little rant, let's cover the positives—er, at least the less negative aspects of the product first. 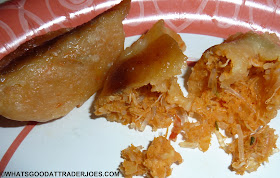 How about we start with the sriracha? I actually think it tastes vaguely like sriracha and does indeed have a little kick. It's not a big kick. And both Sonia and I are always hankerin' for bigger kicks in these foods that are supposed to be spicy. But the spice-level I can live with here. I could certainly stand it stronger, but I personally didn't find a lack of sriracha to be one of the biggest weaknesses in this product.

Likewise, there were little chunks of shrimp that I would have loved a lot more of. They didn't taste bad and their texture was probably the most enjoyable element of the appetizer.

But the texture of the crab combined with that of the wrappers? Weird. It was just a slimy mush. I heated the potstickers via the stove top method detailed on the packaging. I think it was that final steaming step that threw them off. Or maybe I added too much water. At any rate, I drained the water and then fried the remaining pieces in a little more oil. This made them significantly more solid and somewhat more enjoyable, but there was still a gelatinous element to the whole thing that was a little off-putting to me. 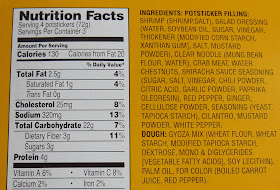 I mentioned before that the shrimp wasn't bad and the sriracha wasn't bad, and I'll stand by those assertions. I guess the flavors that didn't really do it for me were those of the crab and the carrot/red pepper wrappers. It really didn't taste like crab to me. Overall, it was a weird flavor—vaguely spicy and vaguely seafoody, but in general, it didn't work. Both Sonia and I feel like onions, shallots, celery and/or actual carrot bits might have served this product well—any kind of actual veggies would have been welcome.

$3.99 for twelve potstickers. Not super cheap, but not the worst value in the world if you're one of the people who happen to like them. In the end, it's not a complete disaster of a product, but neither of us can recommend it very highly.