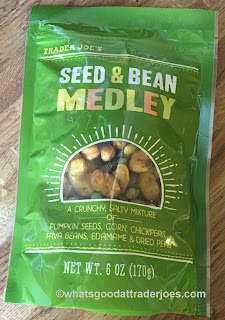 No? Don't know that tune? Good, means you didn't hear it bouncing around in my head.

Thank you for not being in my head. It's a scary enough place without you there, too.

Actually, it's just my lame attempt at making a tune for Trader Joe's Seed & Bean Medley. Other products lend themselves to song parody much more easily. There's not much to really sing about here.

And not that much to really say, either. These kinda snacks must have their own little niche market, with a devoted following, because it seems like every couple months some sort of new dried veggie-type concoction comes up and on shelves and then just as suddenly disappear. Some are hits, others....not.

This one falls somewhere in the middle. Really, the highlight here is neither the seeds nor the beans...it's the corn. Those big, crunchy kernels are reminiscent of other snacks, and are pretty popcornesque sans any trace of fluffiness. I like them, and the flavor of them blend nicely in with the assorted pepitas and fava beans and other stuff that seem more or less  indistinguishable if you're not looking at them. 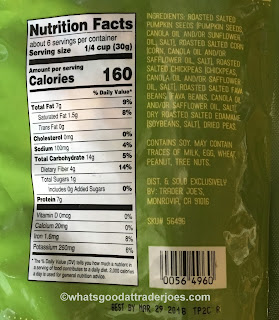 The major drawback? Again, neither bean nor seed...but the peas. Silly legumes. Really, they're the morsels that stick out the most - there's an almost earthy sweetness to them that kinda stands out unevenly from the rest of the crowd. Not awful...but not exactly terrific either. I jusr didn't like them.

The oily crunchy saltiness is the overarching flavor, as would be expected. But a little something else to them would have been appreciated - maybe a little ranch or something a little spicy - but na, just salt. And why isn't this labelled as gluten-free? Cross-contamination concerns that bad at the factory? Jeez.

Our fam was split on the snack bag o' beans and peas. Sandy and our oldest daughter thoroughly enjoyed the mix, while our youngest and I kinda took a bite or two before dismissing it. Meh. Not my thing, but could be yours. And at only like $2 or $3 for the bag, it can be...for practically a song.