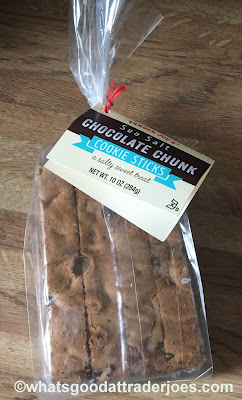 So many varieties of cookies in the world, isn't there? there's hundred if not thousands. In Pittsburgh, it's traditional to have a "cookie table" at a wedding where it's veritable cookie buffet...which to me is usually the highlight of the show. Can't even tell you what my favorite cookie is, because there's just too many to choose from...

...but then there's the classic chocolate chip. It's all American and apparently a much more recent innovation that I had thought. Still, there's that timeless taste and feel, that though it may not be the absolute tastiest cookie in the world, it's one I'll go back to over and over again. The brown sugary batter, with semisweet chocolate chips, preferably fresh out of the oven, or least still a little soft and hopefully not too crunchy siding a little bit towards melty....mmmm.

I'm not one to think that such a recipe needs to be doctored up with too many add-ins like nuts, oatmeal, or, in the case of Trader Joe's Sea Salt Chocolate Chunk Cookie Sticks, a bunch of sodium. Other salty baked goods from TJ's have been darn near overkill. Still, I had to wonder how TJ's would pull these off.

I think they forgot the salt.

From previous experience, I was expecting big crunchy sea salt crystals in these cookies. Though not visible on the outside, there was the possibility they were baked in. Na. No crunchy salt pockets anywhere. To me, this is kinda a plus, but if it's what you were expecting, you may be disappointed. Or we may have gotten a bum batch. Or something. 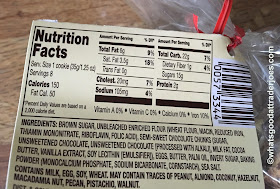 The rest of the cookie confection is okay at best. It's a decent chocolate chip cookie-type deal - still soft and a little chewy, not all crunchy like a biscotti - but it also tastes a little off somehow. Like there's an extra bittersweet essence in the midpart of the bite. Maybe this is where the salty part sneaks in, where it heightens the contrast of brown sugar and butter against the semisweet chocolate. It doesn't taste wrong, per se, but a little off perhaps.

Also, going back to the texture...I'm not a big cookie dunker by habit, so this is untested personally, but seems like the cookie stick would probably crumble and break apart if submerged in coffee or milk or whatever. Thing is, the cookies even remain that way - we've had the package about a week, and they haven't dried out. Which is a plus to me.

Then again, that a package of chocolate chunkers have lasted that long around here says to me that maybe we don't think they taste all that great.

Meh. Lots of cookies in the world, they can't all be slam dunk winners. C'est la vie. Even our kids were noncommittal about them, favoring chocolate bananas for their dessert of choice recently. Meh all the way around. Both Sandy and I are around a 2.5 to 3 for them, so let's go with one each.