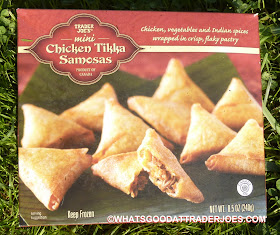 I've always been a fan of not only chicken tikka masala, but chicken tikka as well—basically just boneless chicken with tandoori spices. And overall, I've been super impressed with Trader Joe's Indian offerings throughout the years. Plus, I love me some samosa-type appetizers...so purchasing this new-to-me frozen noshable was a no-brainer. And I'm glad I did.

The shells came out of the oven flaky and crispy, if perhaps a tad greasy. No need for pan-frying these puppies—they provided more than enough oil of their own. Taste-wise, the dough was extremely pleasant and flavorful, not to mention structurally-sound for hand-held snacking straight off an hors d'oeuvre tray or...you know, right from the baking sheet if one were so inclined. Note: that structural integrity guarantee does not remain in effect if one were to, say, cut the appetizer in half with a fork to share with a friend, or to, perhaps, take a picture for a blog or Instagram or what have you. In fact, cutting these little triangular morsels caused most of the chicken tikka filling to squish out onto the plate, which brings me to my next point... 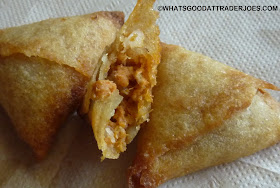 The chicken tikka filling was good, but it's extremely shredded, to the point where it's nearly liquefied...okay, that might be a bit of an exaggeration. I guess I'm trying to say I wouldn't have minded some actual chicken bits, but that's nitpicking on my part.

Also, the flavor was pleasant, but it just wasn't intense enough for me. The Indian spices weren't as potent as other chicken tikka offerings I've had. There was just enough spice to tell that this was, indeed, an Indian-inspired appetizer—but no more than that. I like my Indian food to boast strong, spicy, vivid tastes. This was a much more mild flavor here.

Sonia didn't seem to mind it as much as I did, but she immediately pointed out that as good as the product was, in her opinion, it would have been much better with a sweet, spicy Indian chutney of some kind.

Even though I'm able to point out a few things that might be labeled as "flaws" in this product, it's still pretty dang snackable. The true test is how long the tray lasts in our household of two after it comes out of the oven. In this case, barely 15 minutes. It could have had something to do with the fact it was close to lunch time, but we can't score this too harshly based on that fact alone. Again, we're looking at twelve pieces for just about four dollars, so it's a pretty standard value we've been seeing at TJ's lately.

I'll throw out three and a half stars here. Sonia will spring for four.