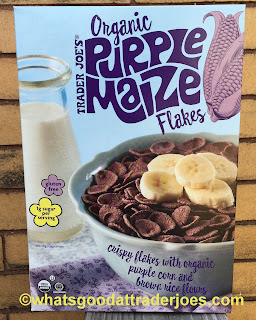 From a breakfast cereal? Seriously?

That's what the back of the box says about Trader Joe's Organic Purple Maize Flakes. I get the punny Hendrix connection and motif, and there's always been a hippie/hipster vibe to TJ's (at least in ym area), so it kinda works, but still. A breakfast cereal. It's corn flakes. I can understand folks looking for a transcendental expereice in a bowlfull of something or another, but...cereal? Well, alright...I guess.

The obvious draw, Woodstock-era connotations aside, is the fact that these are purple corn flakes. Oooooh, pretty, right? My kids like purple, maybe they'll eat them. Organic is, as always, a plus. That "harmonious convergence" the box speaks of is between purple maize and brown rice flours, additionally making this cereal gluten free. All well and good. Kinda groovy. Cereal for the people, man.

As with anything, there's plusses and minuses. Let's start positive. These flakes are seriously crispy. I'd even say almost downright crunchy to the last spoonful. Seems to be due to the basic flake construct being a little thicker than most typical flakes I've had, which easily get limp and soggy quickly. Not here. And there's nothing too funky about the taste - the fact that it's purple has no bearing, and corn and rice usually work well together, except.... 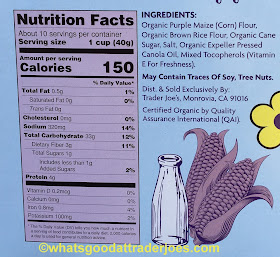 Salt. The corn flakes are downright palpably salty. It's enough that if TJ's were to market these as tortilla chip cereal, I would think it appropriate. I kinda want to dump some salsa on the cereal to give it a try. it just might work. Granted, the saltiness does kinda dissipate once milk is poured on and a little sugar added, but still...there's no reason to get 1/7th of my daily sodium in one cup of breakfast cereal.

And no, the flakes won't turn your milk purple either. I'm alternately gracious and disappointed.

Overall, though, it's a decent enough cereal. Both my kiddos liked it enough to have multiple bowls, while both Sandy and I snacked on a few extra handfuls. I don't do cereal often, and neither does Sandy, so this is definitely on the fence as a repeat purchase. Not that there's anything too horrendously wrong, but once our girls' fasconation with purple cereal goes away, it'd take forever to get through a box. Not terrible, not awesome, and certainly not transcendental. Maybe the purple maize isn't all in my brain. Good.