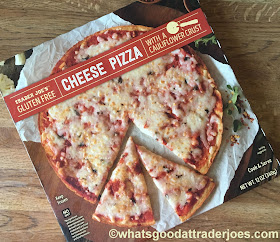 A few weeks back, we put out a review of a TJ's cauliflower pizza crust, and had kinda mixed review. Haven't had it since. Main issue was the texture - it just didn't feel like actual pizza crust. Too wet and dense and soggy. Since then, from what we understand, the prep instructions have been revamped to baking before topping the crust, then baking again. Seems like a high likelihood of that working out - we just haven't seen it in stores to try for ourselves. Have you? Let us know.

Semi-relatedly, here's Trader Joe's Gluten Free Cheese Pizza with a Cauliflower Crust. Pizza with all the guesswork taken out of it - slide out of box, insert in oven. No fuss, no muss.

Now, I have no need to follow a gluten-free diet - I have a preference to, when convenient, just out of occasional adherence to a semi-paleo friendly diet.* Helped me lose a lot of weight, helps me keep it off. That being said, it's hard for me to not compare gluten free products to their glutenfull counterparts, and usually, I find them a little "lacking" or "not to my taste" or whatever simply because of what I'm used to. 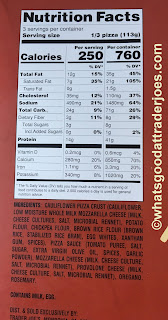 But...I'm really surprised by this cauli-crusted pizza here. I am going to make the comparison to a "normal" cheese freezer pizza, and feel very comfortable doing so. Mostly because, side by side, i don't think I could tell them apart. Seriously. The crust here gets crispy, a little crackery, while browning up easily and keeping all together. Must be the rice flour and all mixed in. It tastes and feels as "normal" as it can.

Nothing too special about the cheese or sauce - it's the standard fare. One can easily top the pizza with whatever kind of toppings you'd like, and it'd work for sure. Nothing to really stand in the way - it's just a cheese pizza. Which is a compliment, I think.

The pizza cost $4.99, which sounds maybe a little high at first, but for what it is versus comparable products, it's a reasonable enough value. I'm not sure Sandy and I will make a huge deal out of making a repeat purchase of it, but we all liked it enough. Even our now five year old, who easily turns up her nose at anything she doesn't like - she ate almost half the pizza herself. Not too much else to say - a good pizza that's not quite upper crust.