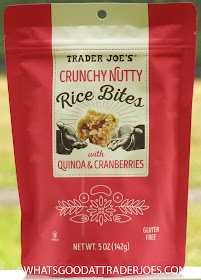 The little description on the back of the bag states: "When a lack of snacks is what ails you, a handful of Crunchy Nutty Rice Bites with Quinoa & Cranberries is the cure." How appropriate after having just watched A Cure for Wellness last night. What a disturbing film—I mean, genius in many ways, but thoroughly psychologically disturbing. What's even more disturbing is that I can readily identify with characters in such films far more than, say, anything that might be considered a normal family film.

But if you've seen the movie, you'll know why I was immediately reluctant to consume something that a random quack medicine man claims is a "cure" for what ails me. The cover art, featuring one of the crunchy nutty rice bites levitating supernaturally over a pair of hands and radiating some sort of angelic rays, didn't help the case for these mysterious snacks. 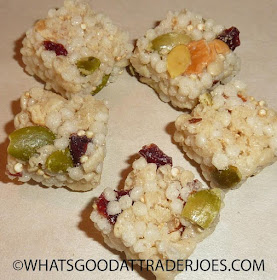 But try them I did, and honestly, I'm not sure if I'm relieved at this point, because these things are so addicting, I'm a little worried there's more to them than their constituent parts listed on the ingredients. I mean, I've tried plenty of crispy ricey snacky things before, and plenty of treats laden with cranberries and quinoa, but none have had quite the same appeal as these sweet, crunchy bites—at least nothing in recent memory.

At first glance, some of the nuggets resemble little square pieces of sushi, with multiple muted colors resting on bite-sized beds of rice. But the similarities to sushi end there, as these rice bites flaunt a brittle crispness and surprising amount of sweetness. Tartness from a generous amount of cranberries tends to shine through in most of the pieces.

There's also a nuttiness in the majority of bites which I'd attribute to the pumpkin seeds before either almonds or cashews, or quinoa for that matter. I mean, there's definitely quinoa in there, but the fact that it's mentioned in the title of the snack seems more of a gimmick than anything else. I guess "pumpkin seeds" or "pepitas" just doesn't get the granola crowd riled up like "quinoa" apparently does.

I'm gonna go with four and a half here.

According to Sonia, they're kinda like "healthy, dry Rice Krispies Treats." That about sums it up. Four stars from her.