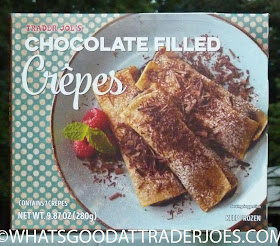 Long before we met each other, Sonia and I both had opportunities to travel to Paris, independently of one another. We each did the Eiffel Tower, Louvre, Notre Dame, Champs Elysee touristy thing and had a lovely time in the City of Light. Someday, we hope to return as a couple, but for now, it's fun recounting the few days we had there and comparing our experiences.

We both found Parisians to be kind and helpful, despite the many stories we'd both heard about how rude they were to American tourists. We both ate at a French McDonald's—because, you know, it doesn't get more authentic than French fries in France, complete with mayonnaise and very vinegary ketchup. And, of course, we both ate chocolate crêpes from street vendors, because they're everywhere, inexpensive, and scrump-dilly-icious.

These Trader Joe's crêpes aren't too far off from the authentic street cart crêpes we both had all those years ago, but there are a few distinct differences. First, the flour portion of the pastries is a little too thick here. When heated according to the instructions, the bread winds up just slightly stretchy and almost chewy—not to the point where it's unpleasant, but we both remembered a thinner, crispier crust on our crêpes.

Straying from the printed directions, Sonia proceeded to heat one of the crêpes on the stove top in a little butter. The texture became significantly more crispy, and the flavor a little more indulgent. We preferred them that way, although heated in the oven, as per the instructions on the box, wasn't bad by any means. I even ate one straight out of the box after thawing for an hour or two. Honestly, taste-wise, there wasn't a whole lot of difference from the ones we heated in the oven.

The shape of the crêpes is a little strange to us. The crêpes we'd always had before—not just in Paris, but most of the offerings we've tried stateside—were like thin pancakes folded over in a semicircle. These are more like little rolls, folded over multiple times. It's nothing to complain about—just a difference we noticed.

The filling here is a nice thin Nutella-esque chocolate creme—not too sweet and not too bitter, either. Just about perfect.

With a price point of $2.69 for seven crêpes, this is one of the more accessible international snacks from Trader Joe's. Four stars from me. Sonia was going to go with three and a half until she tried her own stove top butter-fried heating method. After trying them that way, she's ready to give a solid four.