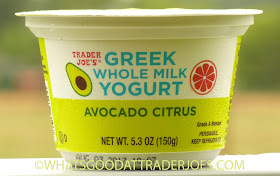 Avocados are simply delicious. When they're just ripe, there's nothing like 'em. We're huge fans of putting them in salads, sandwiches, burgers, quesadillas, or anything else we can justify throwing them into. And who doesn't like chips and guacamole?

But yogurt? That seems just a little weird to me—almost along the same lines as putting bacon in a chocolate bar or elephant dung in candy bites...well, okay, that last one isn't actually a thing...yet. But you get the picture: it almost seems like certain products carry a bit of shock value just by stating their name. And if it works, great. But if it doesn't...everybody's like, "Um yeah, I didn't think that would work, so why did TJ's?" 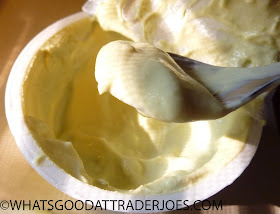 Case in point: avocado yogurt. It doesn't sound like it should work, and in my humble opinion, it simply doesn't. The best part about this product is that it doesn't really taste that much like avocados. It's much more citrusy than avocado-y. But there's enough avocado to make your mouth a bit confused. It's sweeter and more citrusy than yogurt-based guacamole, but it's sour and tangy like most Greek yogurt, and then there's still that distinct, earthy, almost nutty essence of avocado—and at least my personal taste buds insist that it just doesn't belong in yogurt.

I gave it the old college try, but I'm not feeling it. Two stars from me. If it had been "Citrus Greek Yogurt with a Hint of Avocado," then maybe, just maybe it could have worked. Interesting concept though, I guess. And I don't feel super let-down, because my expectations for this product were much lower than the ones I had for, say, the PB&J Greek Yogurt.

Sonia's only comment: "I don't hate it, but it's just weird." Three stars.