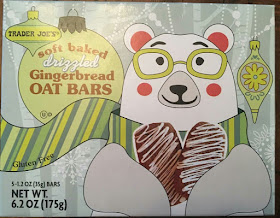 Must be bear season at Trader Joe's.

For the second time in scarcely over a week, here's another new, presumably seasonal product featuring a friendly, partially clothed bear offering some sort of treat. This time around it's Trader Joe's Soft Baked Drizzled Gingerbread Oat Bars. I mean, look at this bear - rosy cheeks, glasses, an ornament. Heck, (s)he's even holding a couple of the bars in a heart shape. I want this bear to be my friend. The fact (s)he's promoting a healthyish snack bar probably means I'm less likely to be eaten as well.

But that's not all that's on the box front. You'll have to look somewhat closely, but there's two, fairly often contradictory terms: "soft baked" and "gluten free." I'm not gluten-sensitive or anything by any stretch of the imagination, and I appreciate all the efforts that TJ makes to be celiac-friendly. That being said, whenever trying any product that's sans gluten, more times than not, to me, the texture leaves something to be desired. If this were truly a "soft baked" oat bar, it'd be quite a feat. 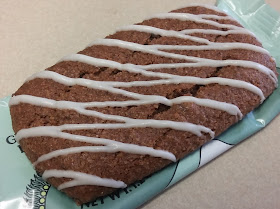 Unsurprisingly, the TJ's oat bars would not be what I'd describe as soft baked. Not at all. Dry, tough, and chewy? Yes, yes, and yes. It's a work out for the molars. Take a look at the ingredients - oats, almond butter, fig paste - there's no way it wouldn't be otherwise. The bite feels like a cross between a semi-stale Nutrigrain bar and my grandmother's molasses cookies (which I like by the way, Grandma!) that would be less disappointing if not promising to be "soft baked".

Aside from that, I like the bars quite a bit. Not a lot, if any of the almond butter or fig paste taste pop through - it's instead mostly oatty goodness with a heavy ginger bite. Seriously, the crystallized ginger in the bars are actually pretty close in potency to the Triple Ginger Snaps, so if a lot of ginger isn't your thing, stay the heck away. It's sugared over somewhat by the fair run-of-the-mill icing scratched over the top. 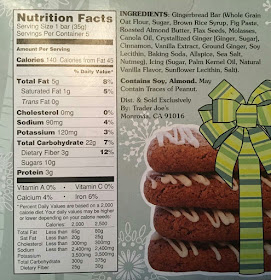 I think my kids liked them - which is odd, because if it's not mac n cheese or ice cream it takes them 45 minutes of begging to have them eat - but I wouldn't be surprised if that's not the norm. Between the chew factor for little teeth and the spicy ginger, it'd be hard to imagine them being a huge hit, cute polar bear be darned.

Anyways, for an on-the-go snack, or maybe even as a breakfast with an apple and coffee, you could do a lot worse. The price at $2.49 for a five piece box seems fair. Sandy didn't have much one way or another to say about them, so I'll assume that means a three. For me, I'll toss in a four - a lower score would be unfair to bear.