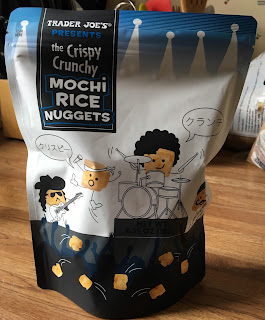 Ever hear of the Mochi Rice Nuggets?

No, not like the band on the packaging of Trader Joe's Presents The Crispy Crunchy Mochi Rice Nuggets. I mean, that's a pretty ridiculous name...though I wouldn't be surprised if a band named that actually existed. There's bands with names like Neutral Milk Hotel, after all. I kinda would want to hear this nugget band though. I bet they could do a killer rendition of "Billie Jean" - you see that bassist with the 'stache and mane? He'd rock that bassline. And I will reward mega Internet points to anyone who can translate what the word bubbles are saying - I assume it's Japanese, because the nuggets are a Japanese product. But you tell me.

Nor are these particular rice nuggets particularly rock-like. Rocks, like stones (and not the Stones). Sandy and I neglected to get a pic of them out of the package, but they do closely resemble the non-cartoony aspects of the bag front - bite sized chunks of rice-type substance. Made from the same kind of glutinous rice paste as most other mochi, these mochi nuggets are crispified and fried. in a way - and this is meant as a compliment - they're more spongelike then the last product I reviewed, its name notwithstanding. Except instead of chewy, it's decidedly more crispy and crunchy while still retaining a slightly springy feel. Add in a little greasy comfort, and it's addictive. 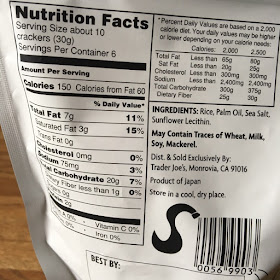 The first time I bit into a nugget, the taste immediately reminded me of something familiar....something distinctive....something I haven't had in a long time. But I couldn't figure out what it was. Crispy, a little oily, definitely salty, with a grain kinda feel to it...ah, there it is. Bugles. Yes, the mochi rice nuggets taste almost just like Bugles, except in a form you can't easily stick on the end of your finger. And yes, I know Bugles are corn based, while these are rice...but the taste is very similar, and it's not just me saying it. One of Sandy's friends tried a few, and unpromptedly said the exact same thing. It's like each nugget was a handful of Bugles that got compacted down into a snackable cube-esque form.

It is worth mentioning that the nuggets are not labeled as gluten-free - according to the back, there's a chance of cross contamination with wheat. And also, of all things...mackerel. I don't even know how to say anything more than that. But there could be mackerel in your mochi. Seems perhaps some quality assurance could be better enforced at the factory, hmm?

I like the nuggets quite a bit. So does Sandy, and our kids too. I'm really hoping these become a thing with some different flavors and varieties coming out. Black pepper would be killer. So would garlic and herb, or even something like cinnamon and sugar. As is, though, the nuggets seem like they'd pair with almost anything, so there's some versatility. At $2.99, they'll be staple in our house for sure.