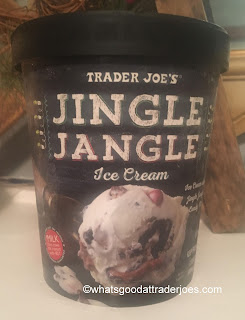 There's a certain allure to places like Coldstone Creamery, or the local frozen yogurt place where you can put in all your own mix-ins, isn't there? It feels like an ice cream laboratory, where you, the Dessert Doctor, concoct your own blend of all sorts of various ingredients then devour it all. It's cool. You're in control. You know what you're doing. You're going to make the Best. Ice Cream. Ever. It's going to be amazing, and all yours.

Well, maybe that's your experience. Must be a lot of peoples', otherwise they wouldn't be so popular. But it isn't mine. Now, I'm a guy who likes chunky, wacky, jumbled frozen deliciousness as much as anyone else - I've been to the Ben & Jerry's mothership in Vermont literally about 100 times, and wondering when I'll have my next chance - but it's not been my experience. I take what I feel would be an awesome mix, and instead the outcome seems less than the sum of its parts. Like I did something wrong.

It's kinda like that with Trader Joe's Jingle Jangle Ice Cream. This oughtta be a slam dunk. Take TJ's semi-popular Jingle Jangle and mix into vanilla ice cream! Sounds like an easy yum! Can't go wrong, can you?

Well...it does. Where to start? Let's go with the vanilla base. Now, I have a deep appreciation for good vanilla ice cream, and TJ's happens to provide one of the better store varieties out there. This Jingle Jangle stuff must come from a different supplier, because it's so...non-descript. Run of the mill. The most boring of boring vanillas. It's white, milky, vaguely sugared, and cold, which while that can describe vanilla, it's not really vanilla. It's uninspired low premium filler at best.

Not a big deal, you may think. That's why all the Jingle Jangle is in there....for flavor! That'll make up for it! Hate to say, but no, not really. I had to recheck our Jingle Jangle review to see what's even in it, because all I tasted was cold, hard chunks. And that's even when my spoon came across something - there's not a whole lot mixed in. There's little specs of dark chocolate this and that everywhere. I spotted a couple busted peanut butter cups here and there, and was excited when I found a shard of choco-covered pretzel, only to be dismayed when I bit into it and discovered how soggy it felt.

Major bummer. This ice cream is really rather ho-ho-ho hum. Now it's two seasonal products in a row I've reviewed that I've not overly liked. this time around it's not just me. Even Sandy didn't really enjoy it much either. The kids seemed to like it fine, which shows how easily content they are. I could really learn from that. Anyways, I'm not expecting to see this in our dessert mix again anytime soon.