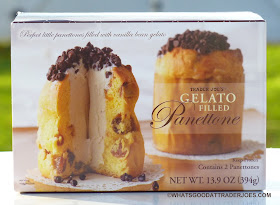 This item wants to be eaten like a cupcake. I mean, look at it. It's got "icing" on the top with mini chocolate chips instead of sprinkles, a body made of something bready and cakey, a liner/wrapper thing, plus a yummy creamy filling.

On the other hand, when I eat things like this with my hands, I tend to look like a baby by the end of it. Some part of the pastry winds up on my fingers, my face...and often in my lap, and I'm sitting there helplessly flailing around trying to lick some of the dessert out of my goatee. Not that babies have goatees. And not that there's anything wrong with getting in touch with one's inner child—however, I'm not nearly as comfortable with wearing my food as most infants are. 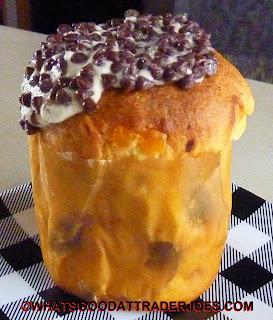 So I opted for the refined adult approach. I broke out a real metal fork and our finest dish (which happens to be made of plastic right now—don't ask). I set the thawed panettone in the middle of it, and dug right in. At first bite, I was mesmerized. Part of me wished I had opted to eat it with my hands so I could shovel it into my face faster. But then that seldom heard-from and even more seldom listened-to adult voice rang out in my head: "Slow down, my friend. This dessert wants to be relished and appreciated."

Because it's awesome—by far the best panettone we've had from TJ's. It's still the same fluffy, soft bread, and it still has some interesting dried fruits in it, but man oh man, that gelato is just amazing. It's both sweet and sophisticated—worthy of a top-notch Italian restaurant. It's worth using a fork just so one can measure out equal parts of gelato, cake, dried fruit, and chocolate bits in each and every bite. 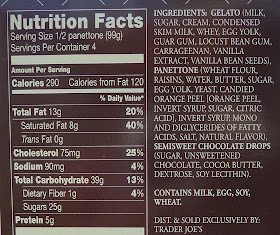 Since the gelato is vanilla bean and there are lots of tasty chocolate drops, there's almost a cookies n' cream vibe about it. It's amazingly rich and creamy, and it blends together with the panettone bread and dried fruit much better than I would have guessed.

There are pieces of candied orange peel, which I'm admittedly not a fan of just by themselves, but in this case they were so tiny that their texture was a complete non-issue. I thought they flaunted a poignant citrusy zing that really added something nice to the other elements. There were only a couple raisins, but they worked somehow, too. I could have sworn I saw a dried cranberry in there as well, but it may have just been a raisin with a sunburn or something.

If you like good gelato and/or panettone, go ahead and pick this up and thank me later. It's one of the best desserts I've had in a while.