Prior to picking up this product, I had never even heard of brandy beans. If I had been asked what brandy beans were, I probably would have pulled something out of my backside along the lines of "Brandy beans are the beans used in the brewing process and fermentation of American brandy," trying to sound erudite and edumacated. And most of you would have believed me. Sorry, I guess that could be construed as an insult. Some of you would have believed me. Maybe. 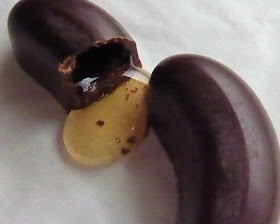 Are these even a holiday item? They were released (or re-released?) at exactly the same time as a million other holiday-related items, so I guess they are. I guess getting blitzed on brandy is sort of a holiday-ish thing to do—or at least a holiday party-ish thing to do. Unfortunately—er, I mean fortunately, you can't get crunk off of these little brandy beans alone. You need to pair them with actual brandy in order to achieve that effect—even though there is a bit of real brandy in each bean. There's a fascinating spiel on the back of the box indicating "sale of this product to persons under the legal age for purchasing alcoholic beverages is unlawful." Wow. I certainly didn't even get a buzz from the product's 4.9% alcohol content, but maybe the youngsters could if they ate the whole box. 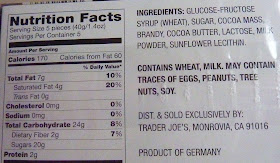 Because again, these chocolates are actually filled with real brandy. And it tastes like brandy, but thicker and much sweeter. The brandy filling almost has the consistency of maple syrup or honey. Somehow, it works with the chocolate. The packaging doesn't specify that it's "dark chocolate," but it certainly seems darker than your average milk chocolate to me. The moderate bitterness of the chocolate helps offset the sticky sweetness of the liquid center. It's a nice combo, and one that I've never had before.

Sonia reacted similarly: pleased, but not blown away. If brandy and chocolate is your thing, then you're probably more qualified to review these than I am, and we'd love to hear from you in the comments below. Double 3.5's from Sonia and me.