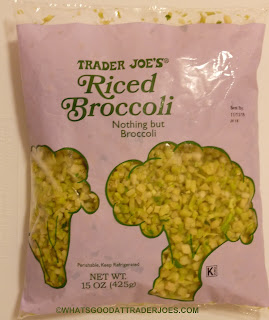 I don't really have a whole lot to say about this product, since it's nothing but broccoli—and my feelings about it are very similar to my feelings about traditional broccoli. I don't hate broccoli. Never did. But I've never loved it either. It needs a little "help," if you know what I'm saying.

A little butter, salt, and pepper really add a lot to the flavor of this product. Or, if you're trying to avoid sodium, a few shakes of the 21 Seasoning Salute can also be a big help. On the other hand, if you're not really watching what you eat, but you still want some "greens" in your diet, this product is delectable when served with melted cheese, much like traditional broccoli. 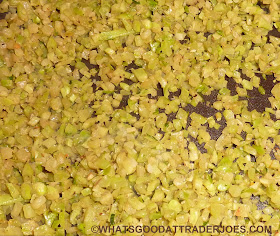 You may remember the previously-reviewed Organic Riced Cauliflower. We tried it around the same time the Shelly family reviewed it, and it's become a repeat-purchase in our household ever since—whenever it's not sold out at the local Trader Joe's, that is. Cauliflower works shockingly well as a rice substitute. And it seems to work without adding much to it. We usually cook it up in a little olive oil, and that's really all that's needed to make it a very palatable side dish. For Sonia and I, this broccoli didn't work quite as well just by itself. Plus, it might just be some silly subliminal, psychological thing, but it's a lot easier to pass a vegetable off as "rice" when it's white, rather than green.

While chatting with Marvo from The Impulsive Buy one evening, he asked us, "What do you think Trader Joe's will 'rice' next? Beets?" He noted that TJ's likes to do interesting stuff with beets. (See: chips and juice). Sonia suggested something at the time, but she can't remember what she said. Jicama, maybe? Personally, my money is on parsnips or turnips. I'd like to see them rice up one of those. How about you guys? Let us know in the comments below.

Sonia gives this riced broccoli three stars. I give it three and a half. It could be a really slick way to sneak some extra veggies into that Thanksgiving meal you're about to have.