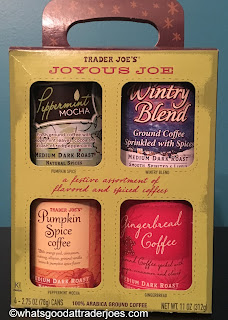 Let's do some quick analysis here: Thanksgiving is a four day weekend. That means four days off, with a couple small kids. That equates to a lot of coffee consumption for us adults. Conveniently, there's four mini-cans of coffee that come in Trader Joe's Joyous Joe, so there'd be like a new flavor every day, right? How can this go wrong? Heck, it might even made a great little holiday gift for a white elephant-type deal, right, so it'd double as review fodder. Really, can't go wrong here....

There's four flavors here: Peppermint Mocha, Wintry Blend, Pumpkin Spice Coffee, and Gingerbread Coffee. Each variety comes in a canister that holds enough pre-ground coffee to make a large 10 to 12 cup pot o' joe.  I'll go through them in order we tried them...

Gingerbread Coffee: Thanksgiving Day. There's an issue here. Usually, we're French press folks, which requires course ground coffee. It's the standard grind for these beans, which means a regular drip pot is required. No matter, we have one of those, with the right size paper filters, let's fire it up...Cue catastrophe. the gingerbread coffee has ground ginger in it which apparently "blooms" a bit when wet. Because of this, somehow, some of those ginger bits Houdini'ed themselves out of the paper filter and lodged themselves under the rubber gasket of the dispenser drip nozzle thing of our coffee pot. So, right after Sandy filled her first cup, the coffee just kept flowing - nonstop - all over the counter and floor and everywhere. I was in the other room and I hear her yell for help and in our pre-caffeined state we have to figure out what in the heck is going on. I have to take the reservoir off and carry to the sink while Sandy holds a cup underneath it to catch all the drips, which sounds easy enough to do until you remember: no caffeine yet. Not easy or fun. This happen to anyone else? Please tell me this happened to someone else.

Tasted decent enough, with a strong ginger flavor. A little robust, and I'm not sure I'd make it my usual cup, but it worked for the day. Probably my favorite out of the bunch.

Peppermint Mocha: Friday. With the Exxon Valdez-ian coffee catastrophe of the previous day behind us, and coffee pot fixed via thorough dislodging of ginger chunks with a toothpick (fun times!), it's minty mocha time. Not great, not awful. Chocolate and mint work well in tea form but never coffee for me - not sure why. Decent amount of mint, meager amounts of chocolate, tasted kinda watery and a little sad. Still better than the peppermint mocha Sandy picked me up from McD's the other day. I'd rank third out of the group.

Pumpkin Spice: Saturday. Enough said. You know what I am by now. Last in my book. Go away, pumpkin spice. Blecch. Go away.

Wintry Blend: Sunday. We are a house divided on this coffee. I think it tastes fine, with a little extra bite. Out of any of the varieties, I could see getting a full can of it. Sandy says it tastes like it was stirred with a burned stick. Hrmm, there are "spices" listed: cloves, nutmeg...and cracked pepper? Pepper, in coffee? Now that's a new thing to me at least, and it does add an extra little slap that I could see would be offputting - I do get the burned stick sensation, but I just so happen to like it. Not Sandy.

So, there you have it. I'd prefer a full bean version so I could use a French press; however I know not everyone has their own bean grinder so I get why it's pre-ground as a default. If you need an inexpensive (less than $10) gift for someone who likes flavored coffees, or if you just want a little seasonal variety pack, I could see it the Joyous Joe being a worthwhile pick up. But we'll probably pass going forward. Sandy's in the spirit with giving it a three, I'm bah-humbuggin' it with a two overall.