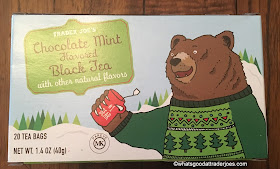 Finally, begrudgingly, reluctantly, and much to my chagrin, the heat is on my house for the fall/winter. It's not that I don't like being warm. Who doesn't? But what I don't like is paying a whole bunch extra on utility bills just so I can be comfy in a t shirt around the house. Plus: it's a 101-year old house I live in. Turning on the furnace does more than make it a little bit warmer; it also makes my dwelling's inherent draftiness all that much more palpable.

In my house, if you're cold: Put on another layer. Grab a hoodie. Lay on another blanket. Still cold? Go run a fast lap or two around the block then come back inside. Bet you're warmer then. There's other ways I occasionally recommend to my wife Sandy that we can keep each other warm, but she's not terribly amused by it. Fill in the blanks yourself.

And of course: hot beverages. Coffee is nearly almost always welcome, but there are certain times and places a hot cuppa tea hits the warm beverage spot a little bit better. While in search of our favorite seasonal TJ tea, Sandy and I instead came across Trader Joe's Chocolate Mint Flavored Black tea, and were just intrigued enough we had to try.

Good stuff, this tea. Each tea bag comes individually sealed in a plastic wrapper that once cracked elicits a strong, fragrant mint scent that's fairly inviting. It's almost as strong as some mint gums, but in a more pure/less candified way. When brewing and sipping, it's still that same smell that carries through, so naturally, it's a pretty pepperminty tea. But that's not all there is. There's some coca shells in the tea bag, presumably crushed to itty bits, which add a definite chocolate flavor. The black tea itself, along with some chicory, make for a good tea base for the chocolate and mint to play off of one another. To me, sugar and cream aren't necessities, but I tried a sip of Sandy's, and with a little something added, the chocolate and mint seem to pop even more. I don't want to say it tastes like an Andes Candy in tea form, because that's not precisely it...but it's not terribly offbase either.

Gotta love the bear in an ugly Christmas tree sweater too, with the look in his eyes suggesting he just spilled some on his pant leg or bare bear feet. Would this bear wear pants? I'm thinking a nice pair of corduroy khakis.

Regardless, it's a fine tea, with just enough going on to suggest a dessert vibe. I could see getting some flavor fatigue if drinking this tea a few days in a row - admittedly, it does taste a little gimmicky. But I like it, as does the wife. She's going for a four, while I'm coming in a little lower - in the end, she's more of a tea person than me. No matter. Now pass me another blanket.