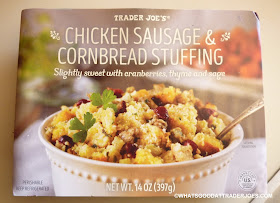 Ah, this looks Thanksgivingy enough. Novembery enough, if you will. No Turkey Day dinner would be complete without some stuffing. And of course, since this has chicken in it, you could theoretically stick this inside the duck part of your turducken and still have turducken without an actual chicken as the inner layer. But I digress.

Overall, this stuff is bready and moist, the way stuffing should be, but I have some pretty big reservations about giving it a stellar score. Firstly, the whole Scarborough Fair thing is in full effect here. Yep. I checked the ingredients as I've done many times, and this product does indeed contain parsley, sage, rosemary, and thyme, although the front of the packaging only mentions sage and thyme. I think this is the first time I've consumed anything that contained all four. So yeah. Simon and Garfunkel would be proud. Or maybe not. Because there's too much of it in here. I'm not sure whether it's the thyme or sage, but one of those herbs is a little overpowering to me. After Sonia's first couple bites, she grimaced and said, "This tastes like an old woman's house." 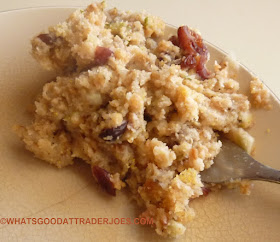 I was hoping to taste more chicken, cornbread, and cranberry flavors. There are plenty of cranberries in there, it's just that they don't do that much for the flavor. I wanted some of that sweet-tartness, but alas...The Scarborough Fair Effect.

Texture-wise, I already mentioned the pleasant amount of moisture—even after heating in the oven. If anything, the product came out a tad too mushy for us. Bits of celery add a nice delicate crunch. And the cranberry pieces feel pretty nice, even if their flavor isn't coming through in a big way. I was also hoping there would be large chunks of actual chicken sausage. There aren't. 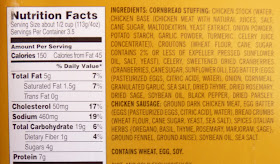 In the end, I'd probably turn to good old Stove Top over this dressing. It's not a complete abomination, and we won't be returning it for a no-hassle refund or anything like that. It's just a different, very herby take on classic filling, and a little disappointing to both of us.