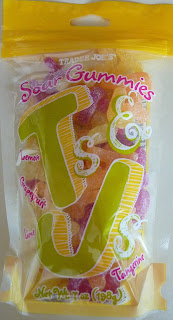 Ah, Sour Patch Kids. The American standard for tooth-rotting, roof-of-mouth-irritating, zero nutritional value, sugary, soury sweetness—an institution nearly as deeply-rooted in our junk food culture as Coke or McDonald's. As a boy, I'd go through a box of them during the course of a two hour movie at the theater. (Needless to say the local dentist made a fortune off of me). I remember my mouth watering as I'd tear open the packaging. Sour Patch Kids—the paradigm of sour gummy candy on Earth. Until now. 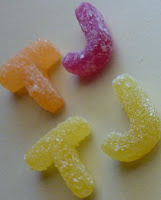 Let's start with the texture. The candy is nice and soft. If anything, I'd say it's just a hint softer and more pliable than your traditional Sour Patch Kid or sour gummy worm. Each piece is coated in the familiar "sour sugar" that graces the exterior of most classic sour gummies. It falls off just as easily—and it still irritates the roof of my mouth, although maybe not quite as much as other sour gummies...? That might just be because I didn't eat the whole bag in one sitting as I did in years past. The letters are nice and flexible, long and thin. If you're so inclined to suck on the candy and get that super tart start and then a sweet finish, I swear that since there's a bit of increased surface area on each gummy, that they dissolve faster and deliver more taste than your traditional Sour Patch Kids, which are basically just oblong slabs vaguely molded to resemble weird little zombie children. All that to say that I think these candies are optimized for maximum flavor-delivery from a geometry standpoint...amiright? Russ isn't convinced. 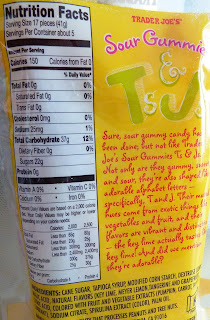 Flavor-wise, they taste more natural than most sour gummies. That might not be saying much, but there was always a weird glaze and aftertaste that would hang around in my mouth long after the box of Sour Patch was gone.  Also, TJ's choice of flavors is a bit more refined than your average pack of sour gummies: tangerine, grapefruit, lemon, and lime. It took me a while to figure out which flavor matched with which color. I figured out that the deep reddish color must be grapefruit. I think they were going for a ruby red vibe. The orange-ish color is tangerine. The colors of the lemon and lime flavors are nearly indistinguishable from one another, but I think one has a delicate green hue you can detect in certain light.

I really have no complaints about this candy. Sonia loved them too. There's even a resealable bag to keep them fresh (which does help one avoid the temptation to consume the entire bag all at once). If I were comparing this to Cookie Butter Ice Cream or Chicken Tikka Masala, I might not hold them in such high esteem. But I'm comparing them to every other gummy candy I've ever had, so I can't deny them a near-perfect score. Sonia agrees. 4.5 stars from each of us.