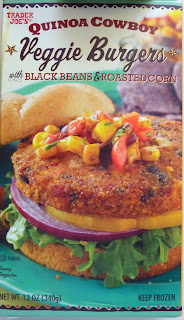 Thanks to the Hawaiian-themed grocery store called Trader Joe's, vegetarian cowboys are now a thing. What vegetarianism and cowboys have to do with the overall tropical island theme of the store, I'm not quite certain. But we've seen at least one other vegetarian cowboy-themed product, not to mention candy fit for cowboys and cowgirls, too.

I guess there's something earthy about cowboys—and there's something earthy about vegetarians and vegans as well. TJ's is just tying that all together for us. Or maybe they're aiming to challenge that stereotype of vegetarians being weaker than meat-eaters (I don't subscribe to that notion, by the way) by uniting it with the rugged machismo of the old western frontier. Regardless of all that, I'm fairly certain that more urban-dwelling hipsters will wind up eating this product than actual cattle-ropin' cowboys, if only because there aren't many TJ's in the middle of cattle country.

Yet still, it's an amazing product. It's like a spicy black bean burger with chunky salsa cooked right into the "meat." It's not really one of those fake meat burgers that's desperately trying to taste like beef, so if it's a true burger you're craving, I say look elsewhere. But if you're adventurous and wanting something new, I'd encourage you to check this out. It takes the whole veggie burger thing one step further in terms of taste and texture. Not only is there quinoa mixed in with the black bean base, but there are chunks of peppers, corn, and whole black beans in the mix. It's a complex, hearty flavor with a slightly spicy southwestern vibe. I ate mine with a slice of asiago cheese and it blended perfectly. I mused about which condiments, if any, to throw on, and decided to eat it plain in the end. I'm a big fan of ketchup and mustard on almost anything that calls itself a burger, but in this case, I'd add a bit of extra hot salsa, if anything—but that's just my opinion.

We cooked ours on the stovetop in a tiny pool of olive oil. It came out firmer and crispier on the outside than on the inside, and overall, the product was a bit soft. If not held together by a bun, it might have fallen apart very easily. There's more substance in the peppers, corn, and beans than in the base of the burger itself—but still, I can't complain, since the aforementioned chunky ingredients were plentiful throughout. 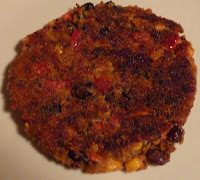 All in all, it's not a great approximation of an actual beef hamburger, particularly in the texture department, but a delicious vegetarian lunch or dinner nonetheless. At $3.69 for four patties, it's a good value also. I'm always on the lookout for something unique and new, and this burger didn't disappoint. All you rugged vegetarian cowboys, saddle up!