I would have taken a picture of this product out of the package for you guys, but if you want to know what it looks like, just head on over to your kitchen sink and turn the faucet on. Seriously. You can take that "water" part of the product name pretty literally. It might be ever so slightly thicker than tap water, but certainly not to the point that anyone could pick it up in a photograph.

So apparently, this beverage is like water that just came straight out of a maple tree. It has lots of minerals and nutrients that were en route to branches and leaves and roots and stuff, but good ol' Trader Joe intercepted it and brought it right to the shelves of his stores for us to enjoy instead.

Taste-wise, it's not unlike water...but maplier. I know, I know, that's not very descriptive. But it's true. Now, if you're thinking of putting a bit of maple syrup in a glass of water to simulate this product, I don't know if that would do it. You'd need very little syrup, and I wanna say that putting any amount of maple syrup in water might result in a sweeter beverage than the one we have before us. It's barely sweet at all. In fact there's really barely any flavor at all. But I'd say there's a faint nuttiness about it. Sonia says it tastes like that Pedialyte stuff they give to kids when they're sick. She thinks the taste is very strange. And I have this crazy notion that just struck me—it kinda tastes like water with a hint of bubble solution in it. You know the slightly soapy liquid you made bubbles out of with a plastic wand with a circle at the end of it as a kid...? It tastes kinda like that—yet not quite as disgusting as that probably sounds. 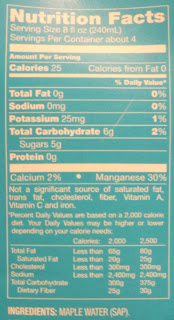 This is one of those situations where we might actually have a beverage that could theoretically hydrate better than water. That's not my foodie-hack expertise talking. A doctor once told me that water has a tendency to go right through you, but other drinks "have some substance," like electrolytes. And doctors have magic pieces of paper on their walls that make everything they say more correct than the things normal dumb people say. Turns out maple trees and other plants crave electrolytes just like we humans do.

Sonia gives this product 2 stars. I give it 3.