Need a cool, refreshing drink for a hot summer day, and something like maple water sound a little too silly and hipstery for ya? Well, how about some ginger beer?

Note: Trader Joe's Brewed Ginger Beer is neither ginger ale nor is it alcoholic. Ginger ale, although occasionally delicious, is your basic ginger-flavored soda, of course. Ginger beer, on the other hand, is a beverage produced with via brewing and fermentation and the whole nine yards. Here's a guide on how to make your own to give you an idea of the process involved.

As for the outcome: delicious. Both Sandy and I are pretty big fans. There's very little carbonation, if any, which makes for a cool, crisp flow. Although not as harshly ginger-tinged as some other TJ's brews, there's still a good, solid ginger bite underflow adding lots of bitterness. Yet, there's plenty of tart sweetness to counteract it all, thanks mainly to the limes and sugar.

The taste isn't perfectly balanced or smoothed over, though. The first bottle we drank, it almost tasted like we were drinking two different drinks at the same time. When we looked a little closer at the bottom of the bottle, we saw some cloudy floaty stuff, which I'm guessing was some sort of combination of the lemon/lime juice and ginger that kinda settled after fermentation. Although the bottle says nothing about doing so, for the second time around both Sandy and I gave the bottle a slight shake and swirl to try and mix it all back up, and we both agreed that it tasted a little more even after that. 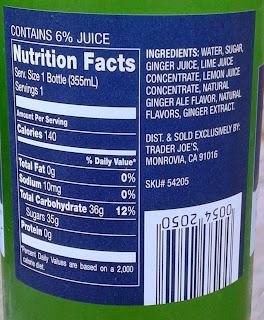 Still, this is one pretty delicious drink for those warm, sticky nights up ahead. Plenty of ginger bite with some citrus-y zing is never a bad combo. If you insist on some boozy additions, I have heard (but not yet personally verified) that this ginger beer is a great choice for either a Dark & Stormy or a Moscow Mule. That's definitely on my agenda, and Sandy is even more eager to try that than me. And for this ginger juice, if your mind is on your money (or your money on your mind), you can buy these either separately for a buck each or grab a four pack for $3.99 - math geniuses, them. Definitely worth the try. Matching fours from the wifey and me.