You just don't mess with some classics.

Like Jennifer Gray's nose. Like Charlie and Chocolate Factory, despite your fancy squirrels. Like about 2/3rds of the songs on this list (beware, some NSFW language). Seriously, not like I was ever a Madonna fan, but when she ripped off "American Pie"....there are no words.

I guess if any of those can be messed with, though, so can Trader Joe's Soy Chorizo.

Listen: I'm a guy who, despite dabbling in pseudo-vegeterian ways about a year ago, keeps a spreadsheet of every type of animal I've ever eaten (up to 23!), and yet, I love, love, love TJ's soy chorizo. Loved it enough for it to be my first review for this site back in the day. Loved it enough for it to be a continual staple for tasty, healthy, easy dinners - chorizo, black beans, rice, salsa and cheese all mixed together (as pictured) - for years to follow. Darn good stuff.

And then...it got taken away. 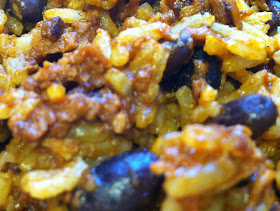 The official word I heard: Needed to change supplier, pricing changed, TJ's wanted to keep quality product at low price. Alright, well, I get that. Bizness is bizness. Huzzah. Still, it's a popular enough product that a) Seems like there should be no shortage of suppliers willing to make a deal 2) A small price increase (let's say 50 cents) wouldn't dampen sales too much (wouldn't stop me) and d) Discontinuation of a popular product should be foreseeable enough to start making alternate plans to avoid months of a product not being in stock. Of course, we're talking about the same place that still can't figure out how to bring back the best peanut butter ever, so maybe this shouldn't have been a total surprise.

So now, finally, it's back in stock, after something like six long months of it being gone. If you're familiar with the old version, this is just about a spittin' image, with just a few discernible changes. First, it seems a little spicier, with a little more bite to it. That part is good.

The other change: It's no longer vegan. There's "milk powder for freshness." Some one please explain how that works. 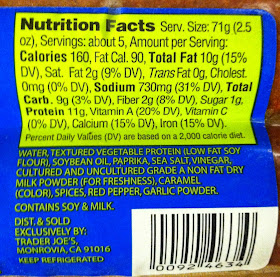 And someone please explain how someone thought that was a good idea. I'm not vegan, but I can see such a change being pretty upsetting for those who are. It's alienating a segment of the customer base. It's not right.

And apparently I'm not alone in thinking this. This is not official word, but I heard this from two separate store employees in person: It's being discontinued...again...to be reformulated back to being vegan based on the outcry from customers about the switch from vegan to vegetarian. Heard nothing about time frame. Maybe one of you reading this is more in the know than I am. This complete lack of foresight is pretty frustrating.

Anyways, to help hold us over, I picked up three packs the other night. Still $1.99 each, which is a darn good price. Since we ate one already, that means I have two left in the freezer (these freeze great!), and after we eat the second package, we'll have an interesting dilemma for third: eat it or keep it? I mean, within a few years, as the world's last Trader Joe's Soy Chorizo vegetarian version, it might be worth enough to send my kids through college. One can hope.

Sorry for the "more rant than review." Just irritating. And I'm taking it on our score, marking it down a couple full spoons off of the original. You just don't mess with the classics.