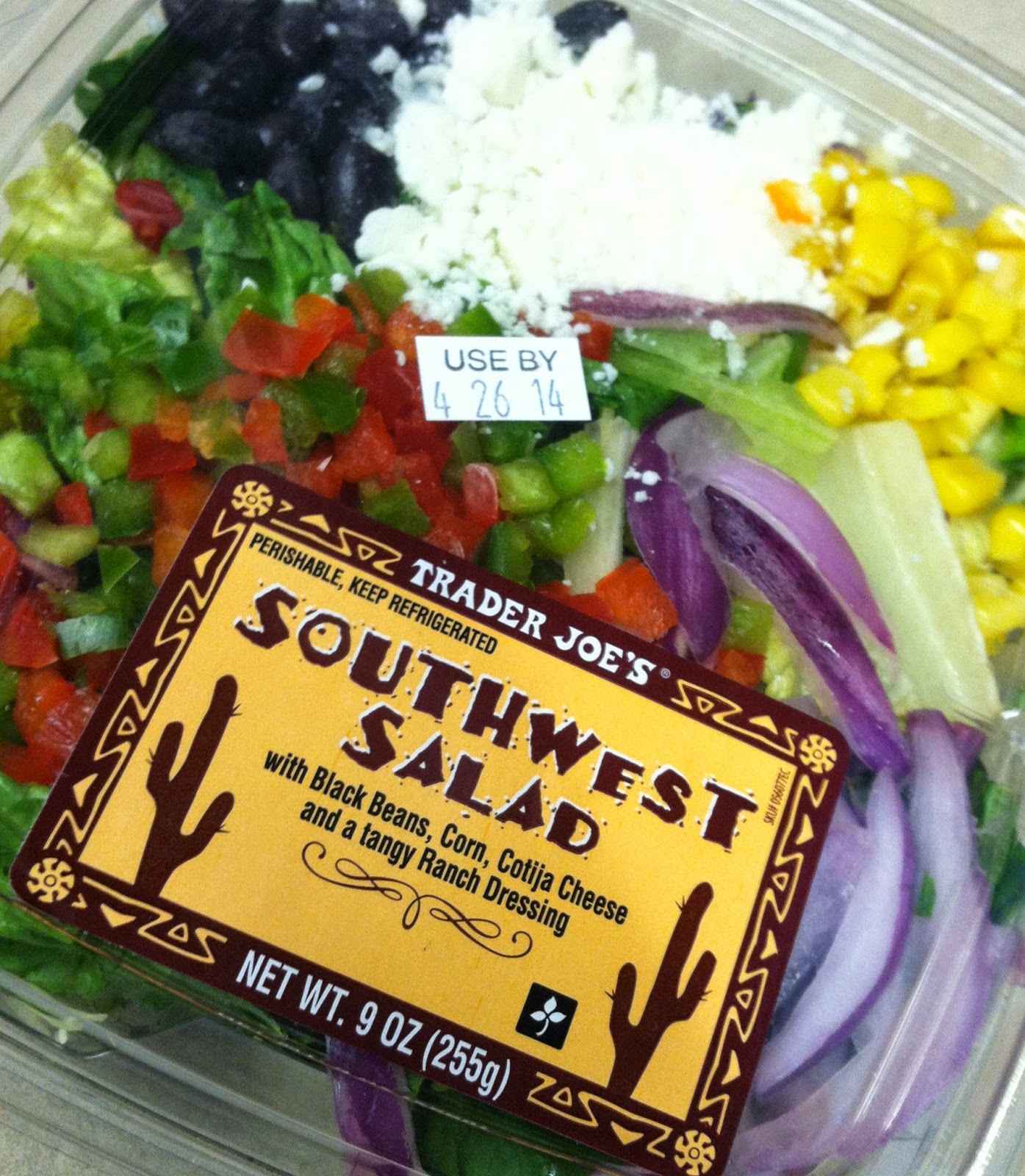 This is probably a little hypocritical for me to ask, living in the city that perfected the art of putting french fries on everything, but what's happened to a just a good, plain, healthy salad? You know what I mean. My goodness, I was making another sneaky salad trip to TJ's and was looking through the selections, trying to find something healthy-ish and appealing. Some of those salads, I may as well have just gone through a drive thru and stuffed my face with a couple McDoubles (800 calories and 50% of my fat from a salad!?!?). It's all the meats and dressings and thisses and thats that just pile up. Salad is supposed to be healthy and taste good.

That's why I picked up Trader Joe's Southwest Salad. Out of all the salads I haven't tried yet from TJ's, it seemed to potentially straddle the line between healthy and flavorful the best. Even with all the dressing, 200 calories and a couple grams of fat didn't seem to be too bad, and beans and corn with a little "southwestiness" tossed in are usually a winning combo.

Well, I said usually. Let's see, where to begin....When I opened the package, it immediately was apparent that this wasn't the freshest of salads I had selected. That's not necessarily a huge deal - it was about on par with other prepackaged salads I've had - but usually Trader Joe's has that ball knocked out of the park. Not this time around. It just all seemed kinda limp. The romaine, an okay mix of slightly-almost-wilty green leaves and white watery ribs, was okay but not great. Those little chunks of red and green pepper lacked any real flavor and were kinda unnoticeable. Never heard of Cotija cheese before, and after having some, not sure if I ever tasted it either - it's just kinda there taking up space. The corn and beans are pretty close to the canned variety, without any spices or anything to make them stand out. The onions lacked any semblance of commitment.

Did I just describe the salad or my teenaged years?

Anyways, lack of flavor on a sald is what the dressing is there for, right? Right. So....where's the dressing???

Oh, that's right, it's packed in there...underneath all the salad! That's right, you have to unearth it and hope to not knock any of your meal on the floor. The packaging genius who came up with that idea probably bags his milk on top of his bread. And there's no other way to say it - the dressing sucks. The weird capitalization of "tangy Ranch Dressing" should have keyed me into the fact this is probably from someone who has no idea what ranch dressing is supposed to be like. Listen, I'm no dressing expert, but ranch means creamy. Instead, it's some weird vinegar-y stuff that's in the packet. I mean vinegar-y in both appearance and taste, although tastewise it's not overpowering. That's neither ranch nor "tangy Ranch" and it's just not very good.

I realize I'm going close to full Goldilocks here saying last week's salad had too much in it and this week I'm going to be saying this has too little. Here's some recommendations for addition: A little actual southwest-y kinda spice. Some lime. Some avocado or guacamole (packaged in a little cup on the side, of course). A little salsa. Maybe some chicken, but not a deal breaker. Something, just anything, that would give it a chance of a date on Friday night instead of being holed up in a dim room playing video games while listening to Creed.

I don't hate the southwest salad, but I'm not impressed either (obviously). It just lacks in too many departments, and for the $4 I spent on it, it seemed a little overpriced for what it was. I guess it'd be okay for small side salad, but at least with my appetite, counting on it for a full meal was a bad decision. Maybe that's why I sound so grumpy. No salad for the wifey, so it's just me, and I'm going double 2's.