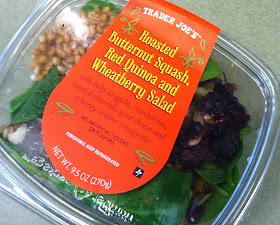 Okay, confession time: For the longest time, I, Russ, was a serial fast food sneaker. Especially at breakfast time, especially on the way to work. Or late at night, while running out for the random errand. Ever want a quick way to gain 40 pounds? There you go, right there.

I'm changing my ways, though. These days, I'm a semi-regular salad sneaker. If there's not enough leftovers for lunch and I have the time in the morning, it's not uncommon for me to run over to TJ's to see what's there. I've had some decent ones, and while I still miss my favorite of all time, the $4 or so I drop on them are very rarely ill spent.  Want a good way to help drop 40 pounds? That won't do it all, but it'll point you in the right direction. 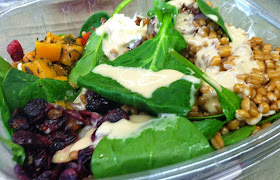 I found myself in that kinda situation on Friday morning, and since it's Lent and I'm respectful of Sandy's Catholic upbringing (although we're both Protestants, she strictly adheres to "no meat Fridays"...eh...happy wife means happy life), that means had to find a good, filling-looking salad without any meat. I saw Trader Joe's Roasted Butternut Squash, Red Quinoa and Wheatberry Salad and figured this would be quite the mouthful to both say and eat.

Well, it sure is. There's a lot that goes into this particular salad. There's squash. And quinoa. And wheatberries. And arugula. And cranberries. And toasted almonds. And goat cheese. And a host of other stuff, all topped with honey sesame vinaigrette. It's everything except the ampersand. I'd think it'd be hard to pull off a cohesive-tasting salad with all of that in there, but in actuality, almost all of it tastes like it belongs. This was my first experience with wheatberries, which kinda taste how they look (like soft, chewy popcorn kernels, except wheat-y), which I took a few bites to warm up to, but by the end was pretty happy with them. Between those and the quinoa, there's a lot to help fill you up, and the almonds add a great little occasional crunch to the mix. All ingredients were pretty fresh, which isn't always the case with prepackaged salads, of course. Also, not all of the dressing is really needed - I put maybe half on and was pretty happy with the coverage, 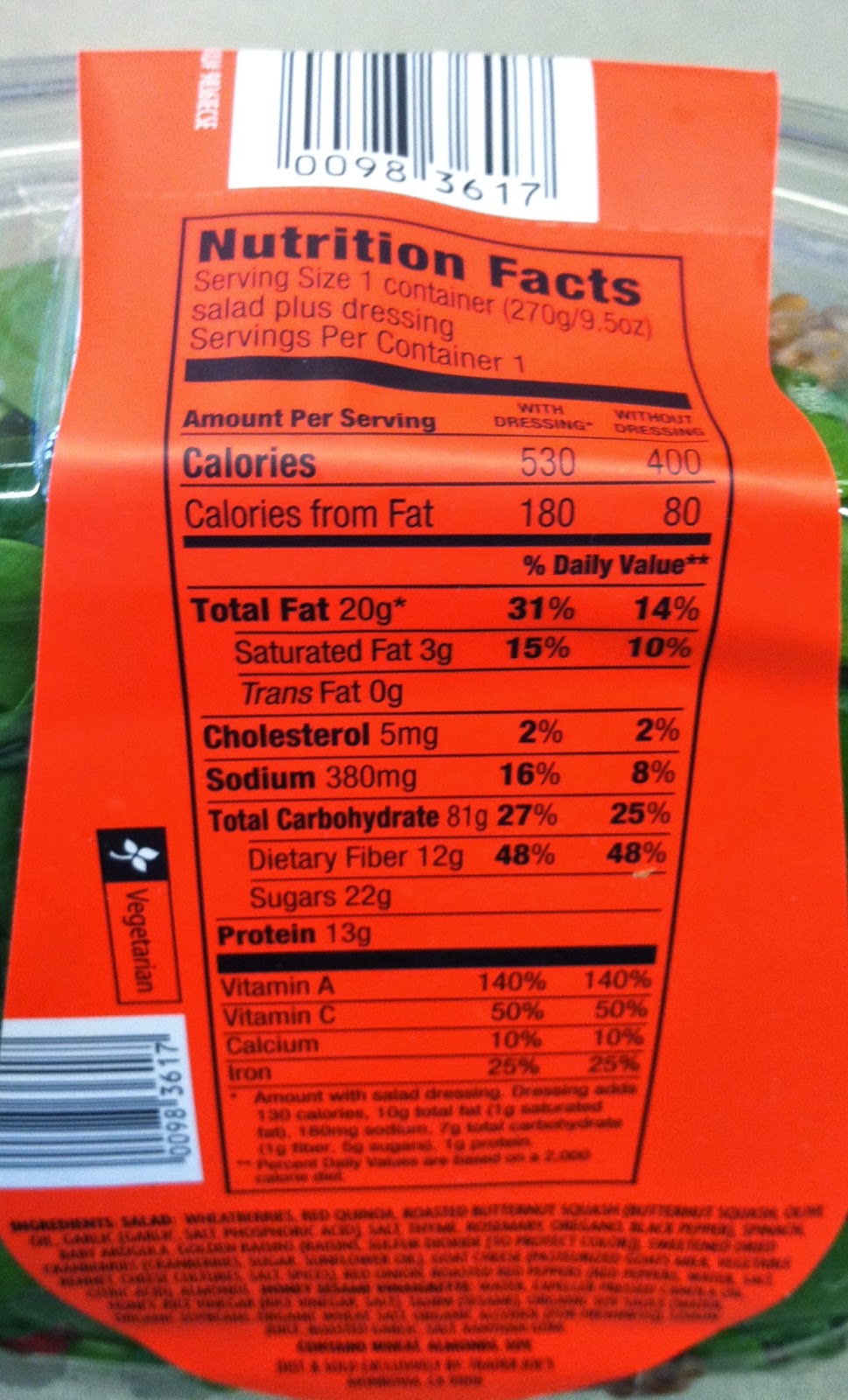 I only have a few minor knocks here and there. First, the squash had just a little too much bite to it. Coulda been "roasted" a few minutes longer for my taste. Also, there were a few bites I came across that were ultra-rosemary-laced that were a bit much. It was an herbal blindside backhanded smack to the taste buds each time. And that helps point out another quasi-issue - why the rosemary? There's enough other things in here for taste, that honestly if TJ's were to adopt a "less is more" approach, it would have worked out great. Sometimes, they need to learn that lesson. I would have voted out the rosemary and cranberries, but asked for a little more sesame in the dressing.

Regardless, while I may dabble in some other salads before hitting up this particular jumble again, I am almost certain to make it a repeat buy, despite the ribbing from the guys at my lunch table. At least we started a scintillating conversation about ancient grains that lasted like 30 seconds before going back to sportssportssports as usual. Though I'm not exactly sure if anything here really is an ancient grain...meh. Since I snuck this without the wife's knowledge, we're going strictly on my score here. All in all, not a bad pick-up.