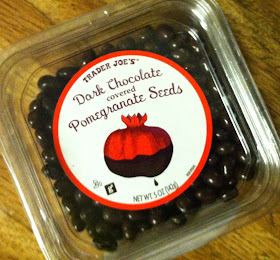 I'm usually not a fan at all of those stupid e-card meme things that float all around Facebook all too often, but I saw one the other day I actually kinda marginally liked. In case you didn't feel like clicking the link, it's no-nose business lady in a power suit saying "Chocolate comes from cocoa, which is a tree. That makes it a plant. Chocolate is salad." Actually, now that I've been forced to look at it again, I kinda hate it. But I guess I can appreciate the sentiment, because as much as I like veggies, I no doubtedly like chocolate even better.

Well, if chocolate isn't really salad, maybe the next best thing is chocolate covered fruit? That's a good way to justify a lot of cocoa-consumption, right?

If that's your train of thought, you can do better than Trader Joe's Dark Chocolate Covered Pomegranate Seeds. 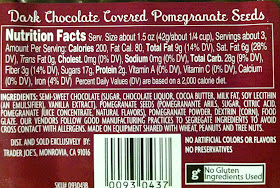 There's just something off about them. It's not the chocolate, which is, as usual, pretty good dark chocolate unto itself. Sandy said the bite feels a little off - the seeds don't exactly crunch nor are they particularly juicy like regular pomegranate seeds. It makes sense to me for them to not be all soft and squishy, so I'd side with them being a little drier and crispier/crunchier. The taste is a little funky, though - it's not a smooth flavor but more discombobulating between the rich dark chocolate and sharply tart/sweet pomegranate. It might even get accented a little further by added pomegranate powder, I don't know. But kinda ends up as a sickly sweet muddied flavor, which at least keeps me from eating too many at once. I think the only reason I've eaten the two midsized handfuls I have is because of the complete lack of chocolate in my diet recently, and out of obligation for you, our faithful reader.

It's a little disappointing, because I thought at time of purchase the choco-covered seeds would be a nifty little snack. At least I'll know next time to skip on by them. Sandy agreed, mainly for the texture related issue, giving them a measly two. Maybe I'm still just a little bitter over the soy chorizo fiasco, because a two is all this'll get from me as well.