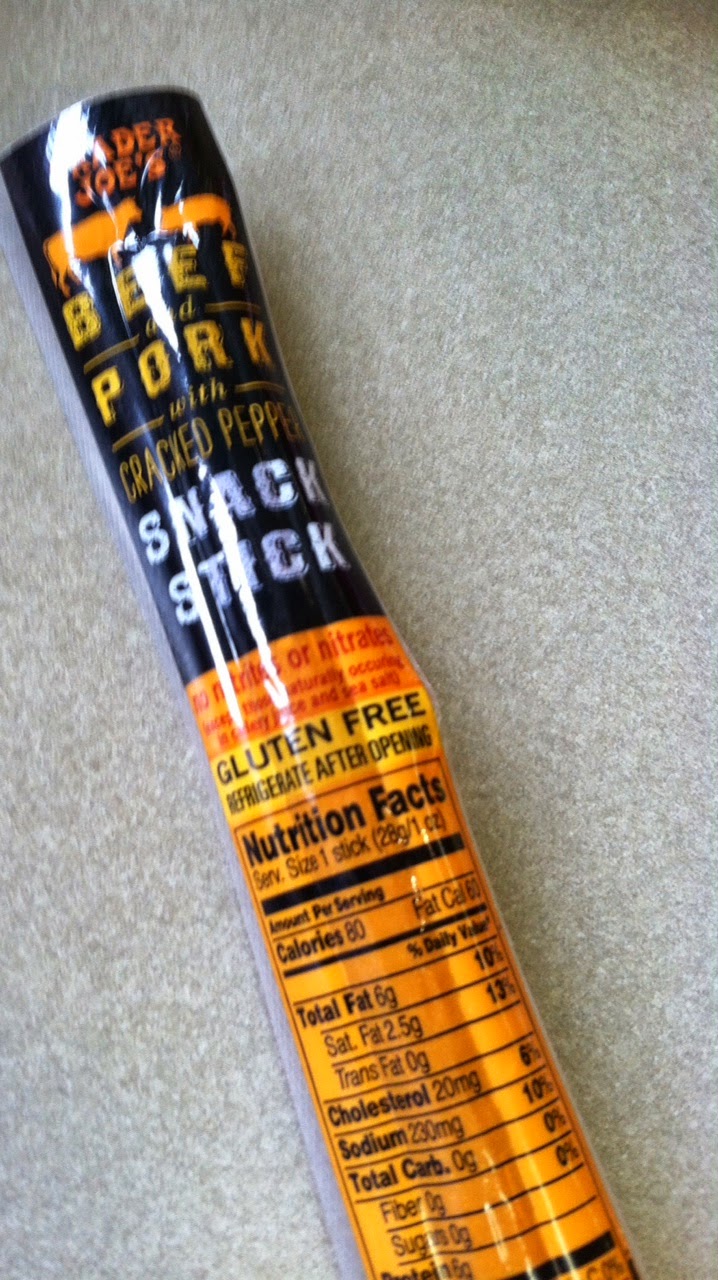 My toddler, 21 months old, is completely irrational and makes no sense. Surprise!

I mean, M (as I'll call her) will happily eat meat...as long as Sandy and I don't make it or give it to her. My dad makes her bacon? Right down the hatch. Go over to my brothers to grill some burgers or hot dogs? Yumz. Even the sketchy-lookin' chicken at her school? If given the opportunity, yes. Heck, she even happily munched on some Spam my folks gave her last summer on vacation as Sandy and I took off on a date night. We make her anything meatlike at all? With only one notable exception, she won't touch it and will make a grimacing, pouty "meat face" as she turns her head away and firmly says "NO!!!"

That's pretty unlike me. I'm casually working on a spreadsheet for all the different animals I've consumed, and part of me is jealous of Nathan's situation growing up. Give me meat whenever I can get it, and if it happens to be in some sort of snacky, shelf-stable form, I'm all for it as well. Kinda hard to grill a steak at the cubicle, y' know.

Enter Trader Joe's Beef and Pork with Cracked Pepper Snack Stick. Ay yi yi, that's a mouthful. Imagine, in another world, how different those old Randy Macho Man Savage commercials would be with this name. Seems like a brand new product, costs a buck, lacks the usual TJ ampersand, and looks like yummy snacky meat to try out at work, so made for a natural pick up.

Pretty good, if you ask me. It's more the "summer sausage" style of meat stick versus the beefy mush of a Slim Jim (not hatin', just sayin'). It looks like about the normal snack stick size of about 8 inches or so. And listen, I'm not gonna sit around and make the argument that this is a healthy snack, because it's not exactly. But, for the relative world of snack sticks, it does seem like a healthier pick up than the ol' gas station standby - less fat, less calories, less sodium.

And the taste doesn't suffer much for it, depending on how much cracked pepper is in your stick. I've had two - the first one I sampled, there wasn't a lot, so it seemed like an okay, not great, couple of bites. Stick No. 2 had much more pepper, which not only added a healthy amount of spice but kinda wakened the rest of the flavors too, like the salt and garlic. For a little satiety staying power, grab an apple or a cheese stick and some water - before consuming, I was pretty hungry, and this helped hold me over for a couple hours. Might be good to toss in a backpack for a light hiking trip.

Sandy's not big on these kinda snacks, so again I'm turning to my coworker Alan, who apparently is honing his TV pitchman skills when he stated this: "A meat stick overflowing with juiciness…this meat was good! The casing had sea salt brine that gave excellent flavor that one would seek from a meat stick, the cracked black pepper provided a nice subtle spice, add some garlic and you have one tasty piece of meat. I thoroughly enjoyed eating my meat as I am sure you will too!" He added more cracked pepper would be his only request. We're both wavering between a 4 and 4.5, so here's one of each.