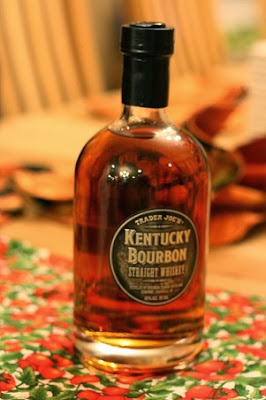 Listen, I'm not going to sit here and type up a review and pretend that I'm any sort of bourbon expert and attempt to give you a technical breakdown of Trader Joe's Kentucky Bourbon. That's just not in my wheelhouse, so if that's what you're looking for, check out a review like this one or this one. My sniffer's too stuffed to try and make up all those aroma descriptors anyways, and all those other terms...yeah, I can take a stab at what they mean, but it's better I don't.

But, courtesy of a good buddy of mine who doubled as a housemate back in my bachelor days several moons ago, I've drank enough bourbon to know what I like and to know what I don't. We'd go pick up whatever at the local state store (Pennsylvania's weird) and go thru a bottle every two or three weeks. What I like: good, balanced, strong flavor, with a little burn, and not too oaky. What I don't like: flavored and infused bourbons (like Red Stag when not used as a mixer) or bourbon that's oaky enough to pass off as some type of Ent secretion, or anything that tastes watered down or cheap. Just give me a good couple fingers of bourbon on the rocks, and I'm set.

That's almost precisely what TJ's bourbon is. There's nothing fancy or pretentious about it. It's very good, not superbly great, but honest, tasty bourbon. There's a little oak here, some sweetness there, and doesn't taste too medicinal like some of the cheap-o stuff tastes. It's a reasonably darkish amber color that also smells the part - a little sweet, a little boozy, etc. For the most part, it's a smooth, balanced flavor that goes down without too much trouble but does put a tickle in the back of your throat after a lingering finish, which I'll admit made me cough the first time. I'm kinda a wimp in that regard, but it's been a while. The ABV hits a more-than-respectable 45% so it's probably best to enjoy when at home and there's nowhere to go for a good while. The word on the webs says this is distilled by the good folks at Buffalo Trace, which I do remember as a bottle I liked to get back in the day, but not recently enough to do a straight-up comparison of the two. 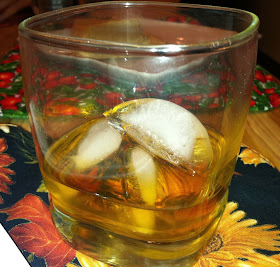 The wife and I picked up the bottle when, on a whim, we hit up the Princeton, NJ shop over the weekend while visiting my folks. I've been to Trader Joe's in nine states (California, Utah, Indiana, Ohio, Pennsylvania, New York, Maine, Massachusetts and now New Jersey) but this was the first time I've stumbled across a TJ's with actual hard liquor and not just beer or wine in it, so we were pretty excited to crack it open with my folks and siblings and their spouses after all the kiddos finally went to bed one night. All of us guys had no problem with enjoying a glass or two on the rocks, while the ladies seemed to enjoy mixing theirs with Dr Pepper more. Good times were had by all.

If this were a $25 bottle, I'd be fairly content. If it were $20, I'd be downright pleased. But it's only $15! That makes me want to write my state senator to urge them to rewrite Pennsylvania's antediluvian alcohol bylaws so I could buy it without going on a nearly 700-mile roundtrip. Silly Quaker heritage. The general consensus of my brothers et al averaged about a four, so that's what I call it for them. For me, I just wish it were tad bit more distinctive somehow, but as is, I'm going 4.5. Nicely done, Trader Joe's. Nicely done.