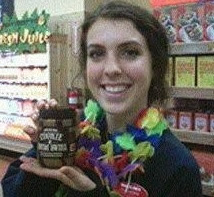 This is Shandra. This is not an awesome (or even "passably good") picture, courtesy of my new cheapo cellphone, but Shandra, and in fact the whole Salt Lake City Trader Joe's, is pretty awesome. As is our habit when we're out of state, Sandy and I were strolling thru late Sunday night, hoping to see anything new or different from our Pittsburgh base, and just as we sidled up to the sample station for a little cherry cider, she came running across the store to her coworker manning the slab, jar of Trader Joe's Speculoos Cookie and Cocoa Swirl in hand, positively shrieking "OHMIGAWWD THISISNEW OHMYGAWDD WEGOTTATRYTHISRIGHTNOW OHMYGAWDD!!!" She cracked it open right in front of us and said "You guys want to try?" It's like she knew who we were! Except, ummmm.... she didn't. Anyways, I'll skip some of the nittygritty play-by-play, but the jar she grabbed was the last one and since it was opened we couldn't buy it but she asked her manager, the very nice impressively bearded Greg, who personally climbed thru the truck that was in the middle of being unloaded just to procure us a jar that we could, in fact, purchase. It kinda helped that he had heard of us, but no matter, we appreciate it all! I, for one, also appreciated the two women who were wandering around the store in knee high socks and what I'll generously call a two piece bathing suit. "Poor girls, having to choose between food and clothes," Sandy said. You never know what you'll see or experience at Trader Joe's, I guess. It's all part of the fun. 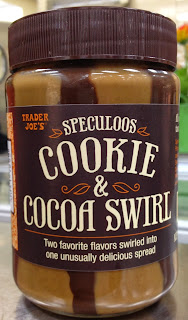 So.....Trader Joe's Speculoos Cookie & Cocoa Swirl. The very existence of such a product begs the question: "How much awesomeness can one jar contain?" Unfortunately, neither has the English language coined the proper words to describe nor has the technology been invented that can compute such things can adequately attempt to answer. It's.....just go. Right now. Go get your own. You'll see.

For those of you still here, let me flail and fail at trying to describe. It's a perfectly unparalleled union of two of the greatest inventions the junk food industry has ever produced: the mega-nommerific speculoos spread and Nutella, of which I can sing its praises all day. It's almost liked I wished this munchie matrimony into existence, because I've spread both cookie butter and Nutella on the same piece of toast before, and had the thought in the back of my head, "wouldn't it be great if these were combined into one thing?" It's mostly because I'm too lazy to use and/or wash two knives. And by "Nutella", I mean legitimately the real deal, hazelnuts and all. If it's not actual Nutella in this product, then it's pretty much the most convincing knockoff/imitator ever this side of Frank Abagnale Jr. Except for the occasional crispie here or there, it's a smooth mix that perfectly straddles the balance between the gentle gingeriness of the speculoos and the dark, decadent tones of the cocoa portion. My goodness. It's....again, just go. Trust me. 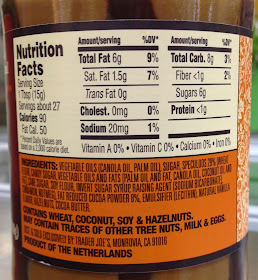 It's tough to imagine a more perfect condimental match than these two tasty lovebirds mashed into one. I've previously posited a "chocolate gum theory" that states that two things that are good separately are not necessarily good when combined. That is far, so far away from being the case here. Maybe it's just my sweet tooth going into overdrive but man....this is just a perfect product. Sandy agrees. After one taste she knew exactly what her score was going to be, and I could tell it just from the look in her eyes. A perfect five from her, and you can count on a perfect five from me as well. I almost feel like I'm shortchanging it, but ten's the max and them's the rules. For something like three bucks for the jar, you simply cannot beat it.