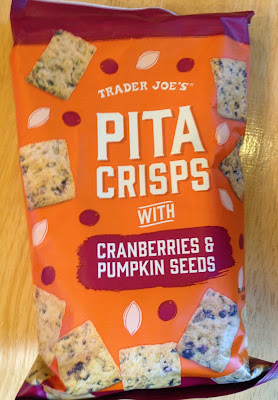 Well, hello friends. In case you haven't noticed, Sandy and I have been pretty busy lately, so I've been a wee bit negligent in my posting duties as of late. I could go into all the reasons why...packing, double closings, moving, painting, two out of town weddings, unpacking, new shift/promotion at work, a toddler who's learning to walk....the list goes on. I'll just take the cue from Dr Evil and move on. Just thanks to Nathan and Sonia for shaking off their pumpkin-induced haziness every now and again to keep this up and running.

Fortunately, we have found time every once in a while to eat, and have found some good stuff in the meantime. On the same late night, blog-writer card pullin' trip in Salt Lake City (complete with customers in lingerie! - apparently this is why - semi-NSFW) we found the Cookie and Cocoa Swirl, we found these Trader Joe's Pita Crisps with Cranberries & Pumpkin Seeds. Unfortunately, we haven't spotted them yet back in the 'burgh, so this is a wee bit from memory, but I think it'll be accurate enough. 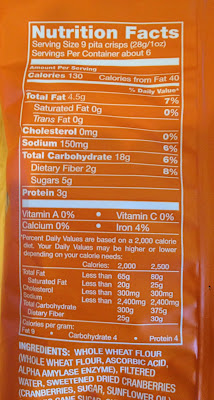 These were a mixed bags of sorts, fairly literally. Let me explain. Most, if not all, of the ones I consumed tasted pretty salty, which if I'm noticing it, that's saying something. Sandy said hers weren't at all and instead were actually sweet, especially the bites with cranberries. Maybe I was just breathing in more of the air as we munched these driving around Antelope Island State Park. I don't know. The saltiness didn't catch on 'til a few chips in, but once I did, my satisfaction level with them began declining kinda sharply.  Other than that, they were a decently okay munchie snackie. The pumpkin seeds didn't add that much in either texture or taste, as they were unshelled, understandably, I guess. Imagine a basic multigrain pita chip, with its overall multilayer crispiness and crunchiness, with an occasional cranberry tossed in, and that was about it.

The inclusion of the cranberries were a little problematic, though. Most pita chips go well with any type of hummus or salsa or whatever kind of dip. Because of the berries, these begged for something a little different, and for whatever reason, cream cheese came to mind. Perhaps to be all seasonal and whatnot, pumpkin cream cheese? Maybe. But the thought of snacking, bag of chips in one hand, block of cream cheese in another is just so unappetizing to me that I just ate them straight and tried to not dwell too hard on potential condiment sidekick options.

Well, whatever. They made an okay enough of a snack for driving around a big stinky lake staring at buffalo while M (now that she's walking, she's not Baby M anymore!) alternately snoozed and smeared a blueberry/fruit sauce pouch snack literally all over her head and car seat. Kids these days....Sandy liked 'em enough to go with a four. That's too rich for my blood. I'm going 2.5.

Bottom line: Trader Joe's Pita Crisps with Cranberries and Pumpkin Seeds: 6.5 out of 10 Golden Spoons
Russ Shelly at 10:01 AM
Share