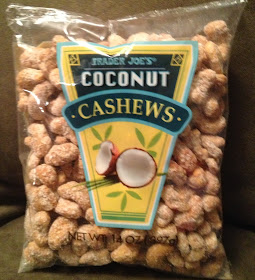 I've admitted before that sometimes I don't look too closely at a product or label before deciding to buy it. It usually happens when I get sent all by myself by the spousal powers-that- be to go find a "good, easy dinner" or a "yummy looking snack" with few, if any, other qualifications. With such an open-ended directive that can be easily interpreted a myriad of different ways, you think it'd be hard to mess up. Nuh uh. Not me. That's how we ended up being forced to consume such sorry excuses for food like those nasty vegetable rolls linked to above, or the ginger napalm shards, or other similar disappointments. It's like when given the most freedom to get something right, I am most likely to swing and miss. Fortunately, the only realm of life this is particularly true in is grocery shopping at Trader Joe's, so I'll consider myself one lucky hombre.

This somehow leads to Trader Joe's Coconut Cashews. Now, I understood that these were cashews with a coconut twist, so I'm not quite that dumb to think that maybe I bought some meat macadamias or pizza peanuts or alcoholly almonds or some other alliterative nut product. The name kinda speaks for itself. 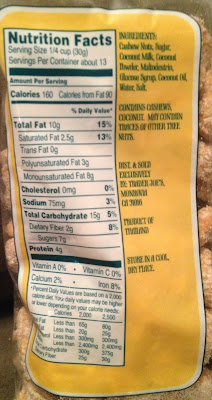 But, I didn't really look at the nuts themselves, or the ingredient list, to see how the cashews arrived at their coconutty incarnations. Perhaps it was the spirits of the season, but I was imagining cashews wrapped up mummy-style in shredded coconut, or perhaps put more appetizingly, shredded coconut all piled up pinata-style, with the reward for busting through that layer being crunchy, tasty cashew goodness. Not the case. These guys are just cashews with coconut powder, coconut milk, and sugar kinda spooged on them with some coconut oil to boot. I have nothing particularly against any of those ingredients, but man, given the option, I'd take shredded coconut ten times before I'd settle for one of those. There's a certain crunch to toasted coconut which could've been pretty interesting with roasted cashews, in my opinion, that I was hoping to try out but wasn't able to.

That's my biggest beef, but it's not my only. I'd like them a little more for straight snacking if they had just a hint of salt on them, just to play up the salty/sweet angle a little bit. No dice. And while my better half has suggested they may be good for making some curry or fried rice, I'm not terribly convinced they'd be any better than regular plain ol' cashews and adding your own coconut milk. Maybe I'm just a little grouchy that I paid $6.99 for the not-quite-a-pound sack and I'm not that particularly wowed about them. If I'm paying that much for something, I'd like to be impressed.

All that being said, I'll snack on them a little here and there, but I'm not foreseeing these nuts as a repeat purchase. They're not nasty nuts by any stretch, but they're underwhleming at best, to the point I'd say I'd rather have plain. Sandy's a bit more enthused about them than I am, as she's been adding them to her morning oatmeal and smushed some up for some baked apple/oatmeal dessert she made tonight, so I was a little surprised when she said she'd give them just a three. "They're crunchy and sweet and....well, not much else," she said. Since I'd say she's about twice as happy with them as I am, I shall have my score reflect that. It's probably lower than what they actually deserve, but well, as the saying goes, our scores can range from soup to, well, nuts.