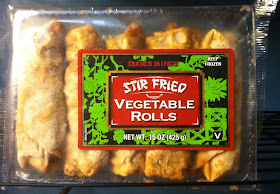 I really wish I read food labels a little more carefully. In fact, there should be more of them. A lot more of them. GMO free? Organic? Fair trade? No antibiotics? Slap it on the label. Conversely, if it's some good ol' ammonium-washed beef or full of wood chips or even worse, straight from the gates of Monsanto, let me know about that, too. I think all of that should be mandatory. Let me know what exactly what I am buying to make an informed purchase. There shouldn't be a controversy about these kinda things.

Although, to be honest, I'd still probably screw things up and buy something I really shouldn't have. Like these Trader Ming's Stir Fried Vegetable Rolls. See, I snatched them on a solo trip, and my eyes inserted the word "egg" before "rolls" and missed the vegan V. That's not necessarily a bad thing, but had I noticed that, I would have turned the package over to read the ingredients to see what all was wrapped up in lieu of the typical egg roll ingredients, would have noticed the word "mushrooms", recalled that my wife absolutely detests all thing fungi, and would have moved on to a different dinner option. But that's not what happened, and all of that didn't dawn on me until about 10:30 at night when I snapped these awful pictures of them after a long day of cubicle jockeying, baby wrestling/juggling and house-working. I kept all that to myself, though, in hopes that if these were good enough as they were, with all the other stuff included, maybe, just maybe, Sandy wouldn't notice. Dinner could conceivably be salvageable if my man Trader Ming could come through as he almost always does. 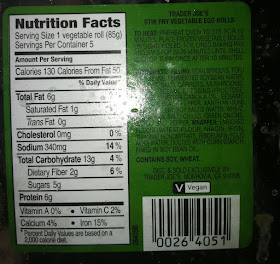 Welllll....that would be a no. I baked all five rolls in the oven for just over half an hour, so a little past their recommended bake time of about 25 minutes. These needed more time, as while the wrappers were mostly crunchy and crispy and pretty tasty (dead ringer for crunchy lo mein noodles), all the wrapper parts that were touching the baking sheet were soggy and drippy and kinda nasty. That's even with turning them. And for Sandy, the wrapper was pretty much the highlight. One bite in and she grimaced. "Ugh! Nothing but mushrooms!" she said as she dumped out all the innards. Indeed, the insides were pretty much mushrooms and bean sprouts with a couple tofu tidbits all kinda mushed together in some grayish soy saucy substance. For some reason, the TJ Indian Hot Pockets (not their real name) came to mind, not because these rolls and those pouches were overly similar in taste, but because of the nondescript disappointing filling. Even at about 11 at night, when dead tired and hungry enough to consider eating my own shoe with enough hot sauce on hand, they were a major downer.

Must be that I'm a little too opposed to wasting food, as I ate two rolls that night, plus took two for lunch the next day, and ate them despite the rest of the wrapper getting all sogged up, thereby losing the best thing they had going for them. At least Il know not to drop my $3.99 on them again, as I can ensure these will not be a repeat purchase. Sandy's a little more adamant about that - when I mentioned I'd be writing this review, she just made what would be instantly and internationally recognized as a "barf face", made some sort of corresponding sound, and shuddered. And somehow that translates to a one, which must mean she really liked the few crispy bites of just wrapper she had. For me, these no-ovo-uh-ohs shouldn't have been the near disaster they were, but I'll go with a two.