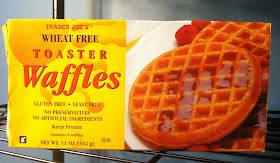 One of the best parts of daddyhood is watching my daughter experience so much of the world for the first time. Heck, sometimes even for the tenth time, it's pretty entertaining. And I'm not even necessarily talking about big, exciting things. It's about the simple stuff, like sitting and playing with some toys, or even just in the grass, or pushing her in the swing. One of our favorite things is each time we go to Target, Sandy and I will have her sit "like a big girl" in the cart and when there's enough space to do so, I'll push her out maybe 5 or 10 feet then run up to catch her. She cracks the biggest smile and giggles every time, like there's nothing else she'd rather be doing in the whole world than goofing off with her daddy as we go get our paper towels. diapers, light bulbs, and perhaps some Archer Farms goodness for dinner. I love that girl, and I'm pretty sure she loves me, too.

If there's one thing I can say without a doubt that she loves, it's got to be toaster waffles. This review is nominally about the Trader Joe's Wheat Free Toaster Waffles, but really, this could be about the multigrain or blueberry variety that are available locally as well. She just happened to pick this box when Sandy and I presented all the options to her our last trip. It's usually too crowded to do our cart tomfoolery there. 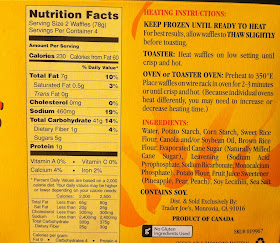 For Sandy and I, who nibble on 'em as we feed the waffles to her, they're pretty much like any other freezer waffle. Really, there's not all that much too special about these gridded goodies. But I do like how after a few minutes in the toaster, they consistently get crispy on the inside, and soft and warm on the inside. They make a decent enough little bite whether plain or with perhaps some preserves or maple syrup or peanut butter on them. The gluten-free type is actually pretty good, and tastes a lot like a "regular waffles," and you can't always say that about products and their gluten-free counterparts. Overall, though,, there's not a single thing I can say about the TJ waffles that differentiate them from the ubiquitous Eggo waffles. In fact, I wouldn't be one bit surprised if Eggo made these, and slapped the "Product of Canada" verbiage and failed to mention both the gluten-free and multigrain varieties on their official site just to try and throw me off the scent a little, because heaven forbid if anyone knows who actually makes TJ's-branded products. It's like the world's axis would get tilted a few more degrees or something if we did.

Going back to the waffles, introspectively, the point of this review isn't really to review the waffles, but just to tell you about my baby daughter who loves them so. I refrain most other times from blabbering on about her, so this one time, just deal. So let's talk about her again. She loooooves them. I think if she could eat nothing but waffles and peas and have a little mama milk, she'd be the happiest baby ever. You see how her face lights up and little chubby legs kick in excitement when I get them out of the freezer - it's like she thinks she just hit the mealtime Powerball or something. Yeah, I make a little show of it, from shaking them in the box to wooshing and swooshing one in the air after being toasted to col it down to a baby-okay temp, but once she gets her lil' grubby grippers on them, it's over. I used to be a lot more concerned about tearing them up into little bits, but now she'll just grab a section and double-fist mash it on down. Doesn't matter that she doesn't have teeth yet, she can down an entire one. I asked her for her input, and she said "Ah da bla bla da wa da ahhhh." Interpret that as you will, but I'm sure it's glowingly positive, and so I'm inclined to hold them in much higher regard than I would otherwise.