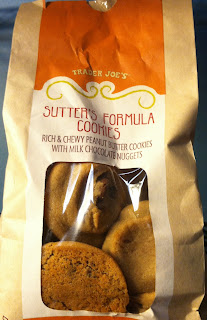 I've searched the interwebs high and low and everywhere in between and have come to this conclusion: I have no idea where the Trader Joe's Sutter's Formula Cookies get their name from. Absolutely none. There's not quite a lack of famous-ish folks with the last name Sutter. For instance, there's John Sutter, a prominent Californian at the time of the gold rush, and his son, creatively named John Jr, who was the founder of the city of Sacramento. Enough social studies there. There's the famous Sutter family tree in hockey, of course, and Bruce Sutter, who's not only a Hall of Fame relief pitcher fom the '70s and '80s but also is my personal facial hair role model. Other than that, I haven't stumbled across any scientists or mathematicians named Sutter, and certainly not anything relating to any formula. Uncharacteristically, the packaging offers no hints either, so I'll just presume that these cookies were partially inspired by all the aforementioned Sutters, thus giving me an excuse to stealthily sneak as many bad puns into the next paragraph or so as I can. See how many you can sift out.

All you really need to know about these cookies is, if you like that constantly irresistible combo of chocolate and peanut butter, you'll want to make a bee-line for these. These are treats worthy of a king. Unlike a lot of "fresh-baked" sugar pucks masquerading as cookies from other grocery stores with the onsite bakeries, these Sutter cookies maintain their freshness and composure for days after opening. They're soft and crumbly yet chewy and satisfying - what a great prospect. Even when your teeth hit one of the big ol' mlk chocolate nuggets, it won't throw you for a curve. Flavorwise, these cookies are a big ol' slapshot to the tastebuds. The peanut butter flavor is impeccably rich and hardhitting, and while dark chocolate has surpassed milk chocolate in my mind, in this instance it's not a strike. I believe there was a sign at TJ's stating these were fresh-baked and delivered every day, which might be part of the sales pitch, but I'd say it pans out.  Watch out or you'll get hooked. 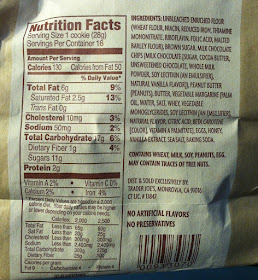 Oh goodness, let's get some relief from that. Sandy and I loved every single one of these cookies we ate. I cannot think of a single argument against them. Yes, they're full of sugar and fat and calories and all sorts of general unhealthiness, but it's a cookie, and one more than worth the indulgence at that. If you feel guilty about eating one of these, go eat some kale or something afterwards and tell yourself it evens out.  Sandy and I aren't going to buy them every time we go, but I promise you, the thought will cross our minds. "I really really really like them," Sandy said. "They're soft, they're chewy, they're peanut-buttery....what more can a girl want?" Well, only one of those adjectives readily describes me....I digress. These confections are near perfection. Our score says it all.