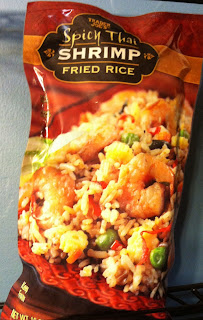 Admittedly, Sandy and I are on a dinner time slump of sorts. We used to cook an actual "real dinner" almost every night, as opposed to our current habit of ripping open a box or bag and heating whatever's inside. Used to be that on "lazy nights" I'd end up making us some fried rice of some sort, using whatever we had around. These days, even that sounds like a bit of an undertaking. There's many reasons why I guess - tiredness from workday, the baby needing attention, the house needing to be cleaned and prepped for putting it on the market - but man, I at least miss actual cooking, but the allure of something quick and easy, with one less mess to clean up is pretty tempting these days. I'm hoping this will change as things hopefully begin to slow down, more veggies get in season, and the farmer's market/CSA season gets into swing.*

But until then, we still need to eat. Trader Joe's Spicy Thai Shrimp Fried Rice was a pretty natural pick up. Pretty much every word in its name is a buzzword that once my eyes see them, I'm instantly interested in whatever it is. It's like naming something Dinosaur Baseball Bikini Beer or Sleeping Baby Couch Netflix White Russian - there's too many good sounding things about it that I gots to see what it is.  I'm just glad that this name at least makes sense. 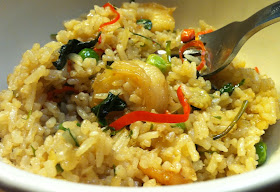 This dish isn't a terrible pick up. On some levels, the fried rice is a pretty straightforward, fairly typical variety one might expect from the freezer section. Typical veggies, typical spices, typical shortage of shrimp, and so on. But there's one or two extra things done right that help kick it up a notch. The teenyThai lime leaves scattered about make a great, flavorful extra touch that I wasn't fully anticipating, even though I've become reacquainted with them recently thanks to these catchy cashews. Also, while the rice and other contents maintain an adequate level of spice that'd be accessible to most folks, the sliced red chiles actually kick things up several notches in the heat department. If you like heat, head for them; if not, avoid them, and the rest of your dinner should be unscathed. And thankfully, TJ's has kept up its track record of of having only fresh, firm, delectable shrimpies included, which is not the norm I've experienced at other chains.

That's not to say it's a perfect dish. According to the label, this is a four serving bag. I ensure you it is not. Sandy and I, who have been watching our portion sizes, were easily able to polish it off without much trouble in one sitting. Need more evidence? There were only seven shrimp in the bag. Tell me how four people split seven shrimp. If you need to feed a crowd bigger than two, I'd say get an extra bag, or at least add some extra protein like some eggs or cashews. I for one am glad that frozen egg bits were not included, unlike other shrimp fried rice offerings in the past.

Other than that, this particular iteration made a decent enough dinner. Grab some spring rolls and you can make a reasonable approximation of a Thai dinner out at a fraction of the cost. I misplaced the receipt, but this cost about four bucks if I remember right. Seriously, only about a small handful of shrimp keep this away from a much higher score. Also, if this didn't give poor Sandy a little bit of heartburn after the fact. I told you to give me those chilis, love, because you're hot enough the way you are, and you just had to roll your eyes. Tsktsk.